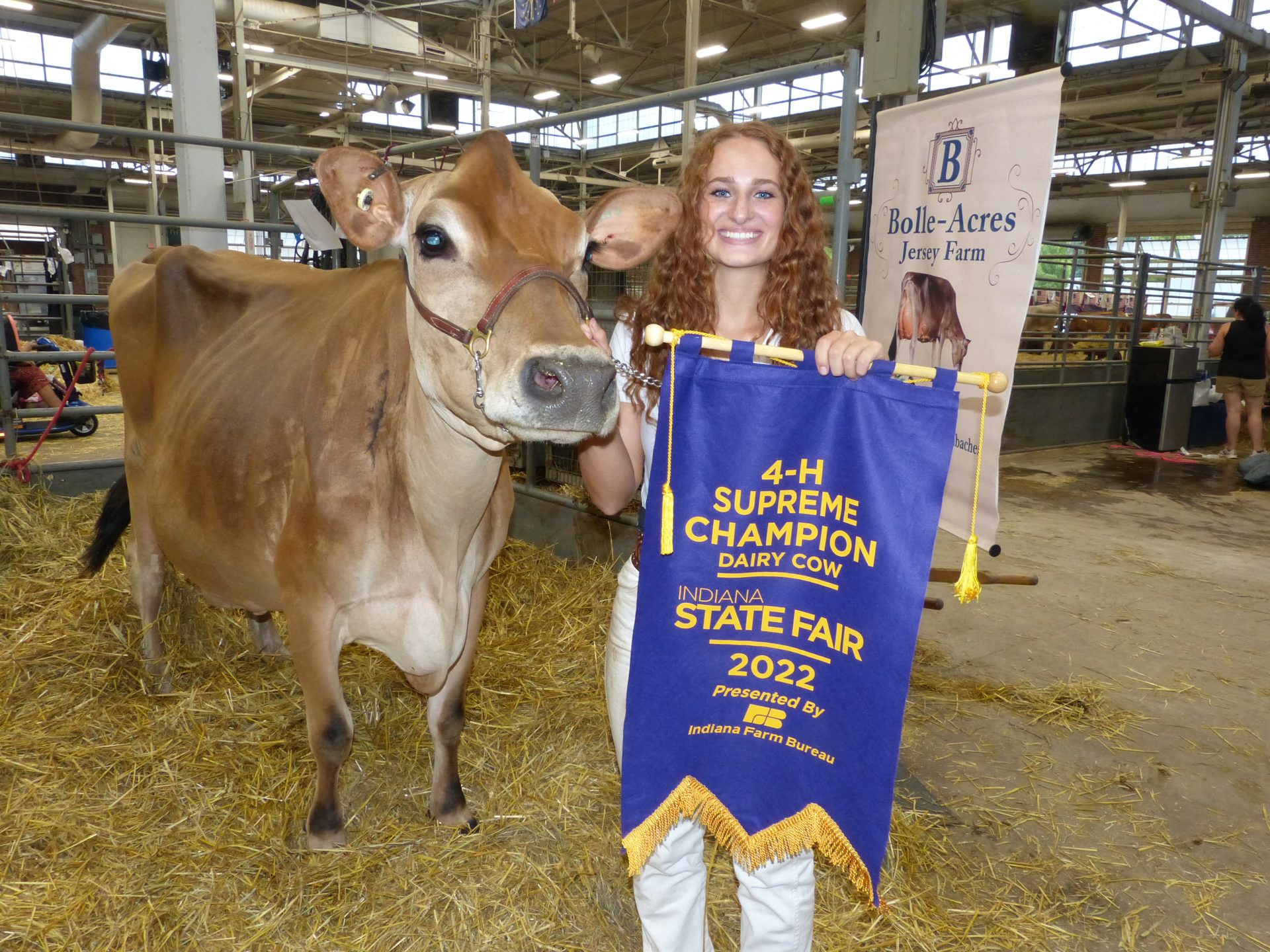 The supreme champions were selected Sunday night at the 2022 Indiana State Fair 4-H Supreme Drive – and for one young lady from the small town of Argos, Indiana, it was a wonderful ending for her ten years in 4-H.

“It was an incredible and really indescribable feeling. It just was an honor to be out there, and then, in the moment, realizing that I won, I was on Cloud 9,” says Sophia Bollenbacher of Marshall County, after receiving the banner for her 4-H Supreme Champion Dairy Cow.

“My cow’s name is May, and she’s actually the great-granddaughter of a national champion we’ve had in the past, Willie May,” says Sophia, who says her supreme champion cow is five-years old and has had four calves.

Sophia recently graduated from Argos Community High School and is now a freshman at Purdue University.

So, what is Sophia’s favorite memory from her 10-years in 4-H?

“This is probably my favorite memory now,” says Sophia pointing to her supreme champion banner. “I think it was a year or two ago, I actually won the senior showmanship and I won a traveling showbox, it was a Dick Miller Memorial Showbox, so that was another really special moment for me.”

What’s Sophia’s advice for OTHER 4-H members who are looking to one day have a 4-H Supreme Champion of their own?

“I would definitely tell them to give it a chance and always just keep working and try your hardest because it’s definitely worth it,” says Sophia.

Even though Sophia is excited for the next chapter of her life at Purdue – she says she’s happy that her time in 4-H ended on such a high note.

“It was kind of a bittersweet way to go,” Sophia says. “I really couldn’t have asked for a better way [to end 4-H] and it’s just a great way to finish it all out and have all the hard work pay off.”

Click HERE to see ALL the 4-H Supreme Champion winners from the 2022 4-H Supreme Drive at the Indiana State Fair.

Click BELOW to hear C.J. Miller’s news feature on Sophia Bollenbacher of Marshall County, winner of the 4-H Supreme Champion Dairy Cow selected during the 4-H Supreme Drive at the 2022 Indiana State Fair.