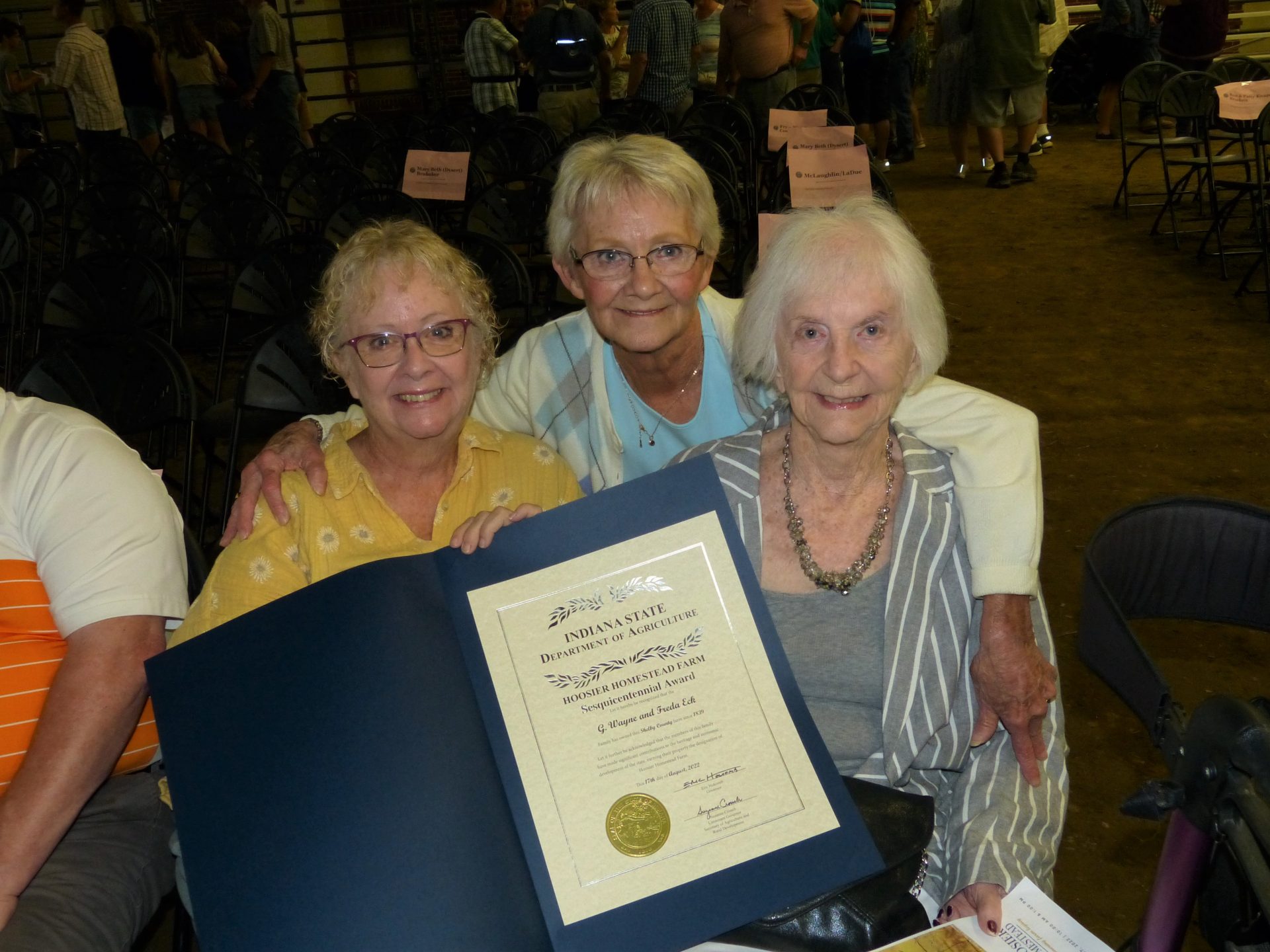 183 years is how long one farm in Shelby County has been in the same family!  A direct descendant of one of Indiana’s first farmers and pioneers says it’s been her ongoing goal to keep his memory and legacy alive.

“Hopefully, it will be continued on after I’m gone,” says Maxine Gambrel, who is 92-years old and part of the G. Wayne and Freda Eck family of Shelby County.

Their family farm was recognized during the Hoosier Homestead ceremony Wednesday at the Indiana State Fair.

The ceremony, hosted by the Indiana State Department of Agriculture, honored a total of 106 farms that have been in the same family for 100, 150 or 200 years.

It was in 1839, when Maxine’s great-great grandfather Berryman Breedlove, first settled on the family farm near Fountaintown as part of a land-grant from President Martin VanBuren – and it’s been in the same family ever since.

The farmland, which is near 1100 West and 400 North not far from Fountaintown, is where the Breedlove family was laid to rest in the late 1800’s back when family burial plots on landowner’s properties were still commonplace. However, the small family cemetery had fallen into disarray, was covered in weeds and headstones had toppled over due to the ravages of weather and time.

It was more than a decade ago, when Maxine decided to restore her great-great grandfather’s cemetery that sits on the family farm property.

“The cemetery was a part of his farm because, at the time that he lived there, there [were] no county cemeteries,” says Maxine. “Almost every large farm [in the 1800’s] had a cemetery for the family.  I think there are about 20 graves there.”

After many of the headstones had toppled over and weeds and shrubs had taken over the land, Maxine led the charge to return the cemetery to its previous glory.

“I’m part of the family, and it feels as though it’s my responsibility to do what I can,” Maxine says.  “I had a lot of help from the [family], so we were able to do that, and I’m so thankful for it.” 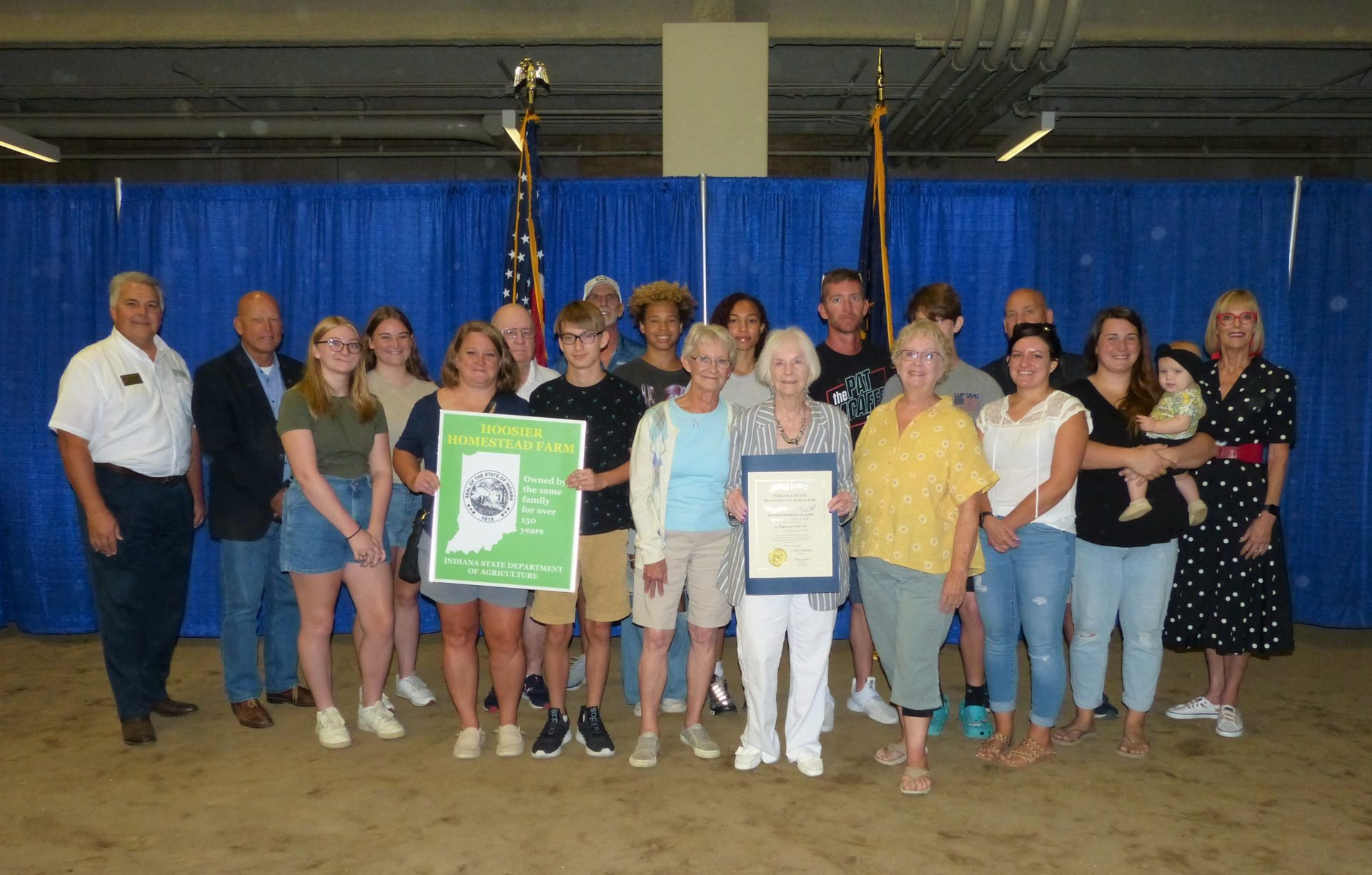 Maxine says she continues to honor the memory of her great-great grandfather, who was one of Indiana’s first pioneers and farmers.

“I’m working on some material for the Breedlove family that I’m going to put into a book [and] publish,” according to Maxine.  “I’m almost finished with it.”

The property today is owned by Jan Smith, another direct descendent of Berryman Breedlove.  Jan and her husband Steve both own and live on the farmland.  Jan and her sister Karen Lindsay of Hancock County are the daughters of G. Wayne and Freda Eck and both grew up on the farm property.

Maxine says encourages everyone to study their genealogy to learn more about their family history – and themselves.

“It’s important to know where you came from, and what you’ve inherited,” says Maxine.  “It’s part of growing.  It does something to you to make you realize that there was someone before you that was preparing for you.”

Click BELOW to hear C.J. Miller’s interview with 92-year-old Maxine Gambrel as she talks about honoring her great-great grandfather’s legacy as one of the first farmers to settle in Shelby County, Indiana, during the Hoosier Homestead awards ceremony at the Indiana State Fair. 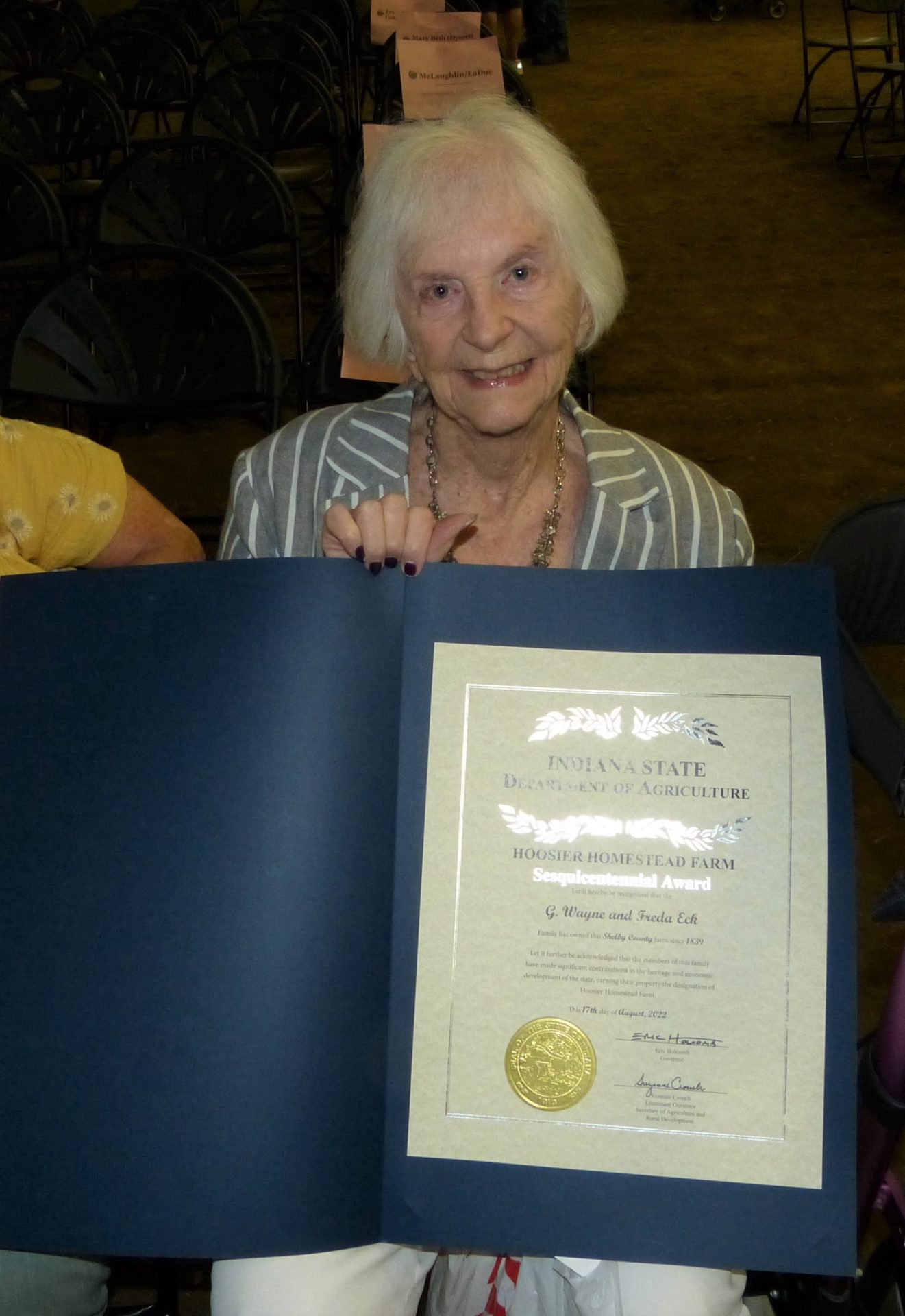 92-year-old Maxine Gambrel poses with the certificate honoring her great-great grandfather’s farm in Shelby County, which has been in the same family since 1839, following the Hoosier Homestead ceremony at the Indiana State Fair. Photo: C.J. Miller / Hoosier Ag Today.