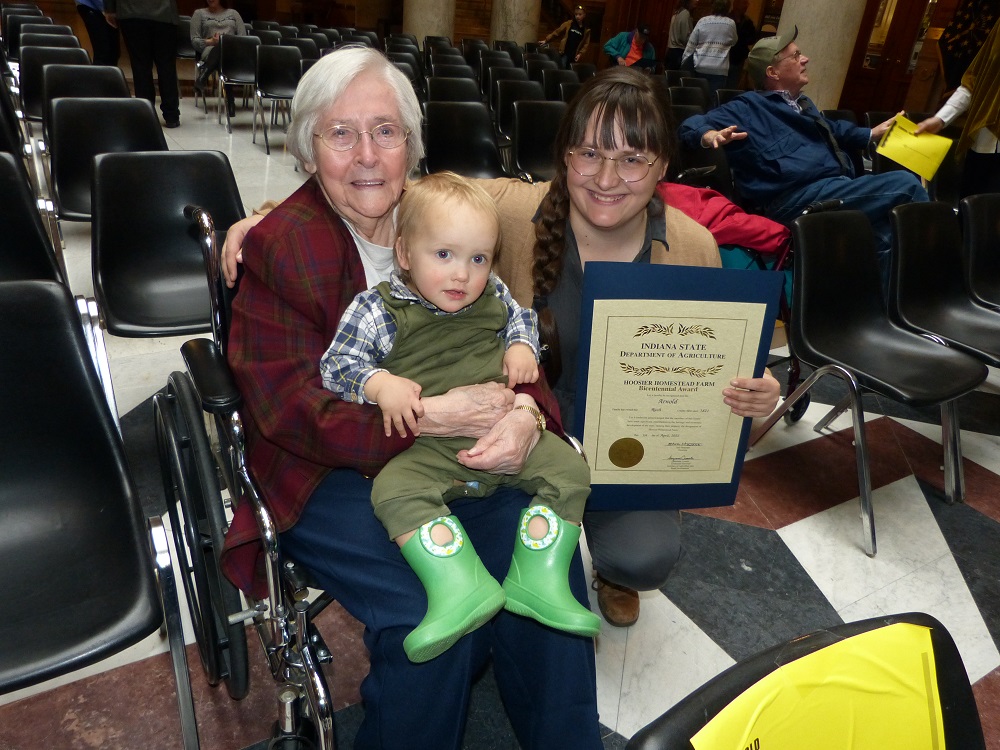 Eleanor Arnold, with her granddaughter and great grandson, at the Hoosier Homestead awards spring ceremony honoring the Arnold farm in Rush County. The farm has been owned by the Arnold family since 1821. (Photo: C.J. Miller / Hoosier Ag Today)

Eleanor Arnold is 92 and has lived on the same farm in Rush County, Indiana for 73 years.  That farm property has been in the same family for 201 years.

It was 1821 when the Arnold family moved from England to an area east of Rushville.  At that time, Indiana had only been a state for four years and their neighbors were a Delaware Indian tribe.

The Arnolds were the first settlers in Rush County, and their descendants were among the 69 families honored during the Hoosier Homestead Awards spring ceremony Friday at the Indiana Statehouse.

Eleanor, who is turning 93 in May, was with her family in Indianapolis to personally receive the awards celebrating Indiana farms that have been owned by the same family for 100, 150 and 200 years.

The Arnold family was represented by its fifth, sixth, seventh and eighth generations at the awards ceremony.

“We’re very proud of it. We’ve enjoyed living there.  I love Rush County and I very happy.  I told my [late] husband I’m glad he married me and brought me [to our farm].” 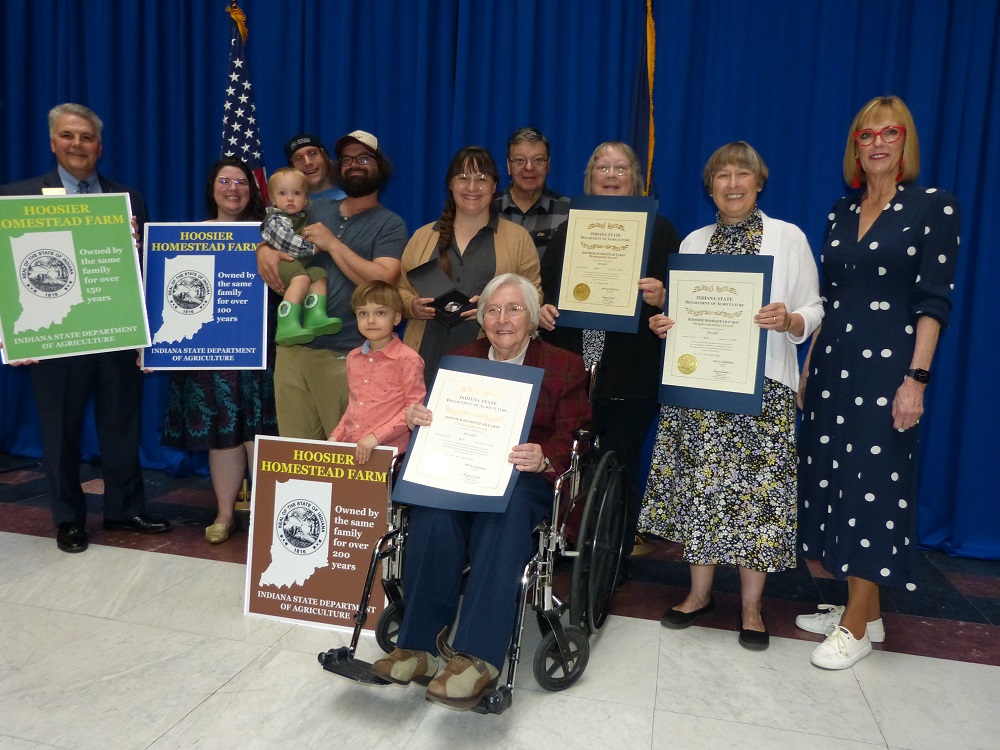 Eleanor grew up in Hendricks County, but met Jake Arnold, her future husband, in Bloomington in 1947.  She and Jake were married for 59 years until he passed away in 2008.

“We were farm kids, both of us, and we were down in Indiana University  and we sat next to each other in a Logic class, which is a logical place to meet your future mate,” she said jokingly.

“We married and lived a year down at school [in Bloomington] until I graduated, and then we moved back up to Rush County having made the decision that we wanted to return to our roots.  My husband really wanted to farm and I loved farming, too.”

Eleanor says she had not only fallen in love with Jake, but his family’s farm.

“I was just struck by it when I met my husband.  I thought I couldn’t believe this house that was had been built by his great grandfather [who was] still living in it.  The land they farmed from the beginning, it was taken from the wilderness.  I was more impressed by it than he was.  He was raised up in it.  I was bolled over!”

Eleanor says she has seen many changes in farming over the years.

“[Farming has] gone either extremely large with very large equipment, or back to what my great grandchildren are going to be doing which is sustainable farming a lot like the way my father even farmed using manure as fertilizer, [as well as] smaller fields.  It’s been amazing to watch the role of agriculture [and] how it has changed.”

Eleanor says she and her family are grateful to be honored by the state, but she is most impressed by the love shown to her and her family throughout the years   by other Hoosier farmers.

“I look around at the people here [at this event] and I think, these are the salt of the earth.  They are the kind of people that I grew up with and I have so much respect for the hard work, the labor, the kindness, the neighborliness, the honesty, the patriotism [and] everything we still see in the farm community.”

Click BELOW to hear C.J. Miller’s report on Eleanor Arnold’s story and her family’s farm history. 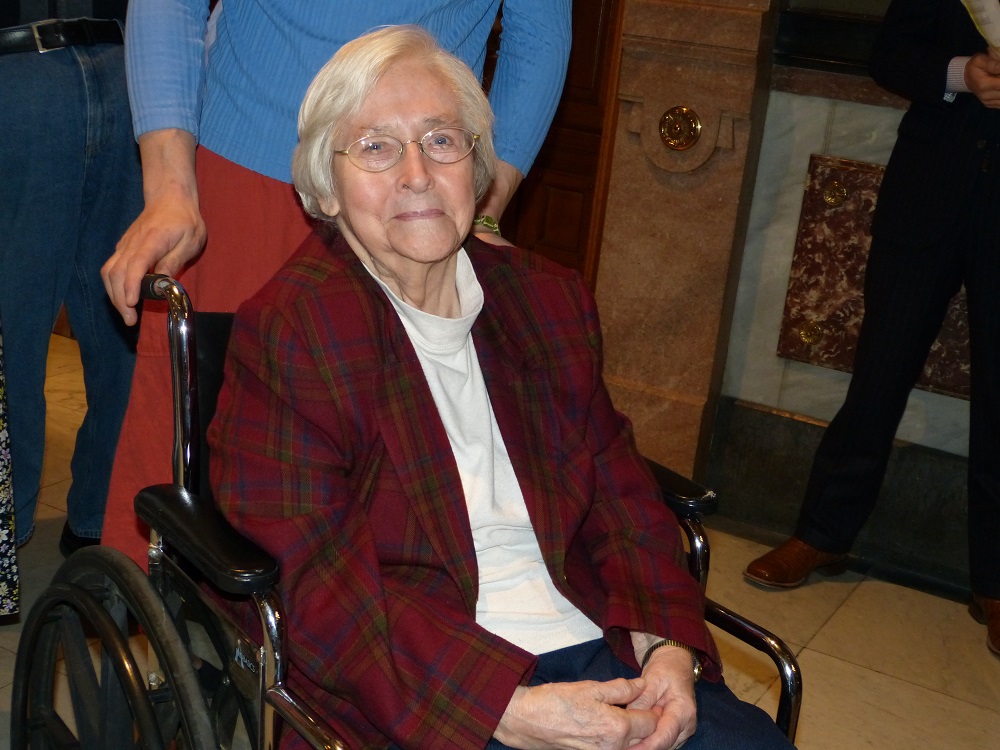 92-year-old Eleanor Arnold at the Hoosier Homestead spring ceremony at the Statehouse on Apr. 1. The Arnold farm in Rush County has been in the same family for 201 years. (Photo: C.J. Miller / Hoosier Ag Today.)

Click HERE to find the full list of Hoosier Homestead award recipients from the Indiana State Department of Agriculture.