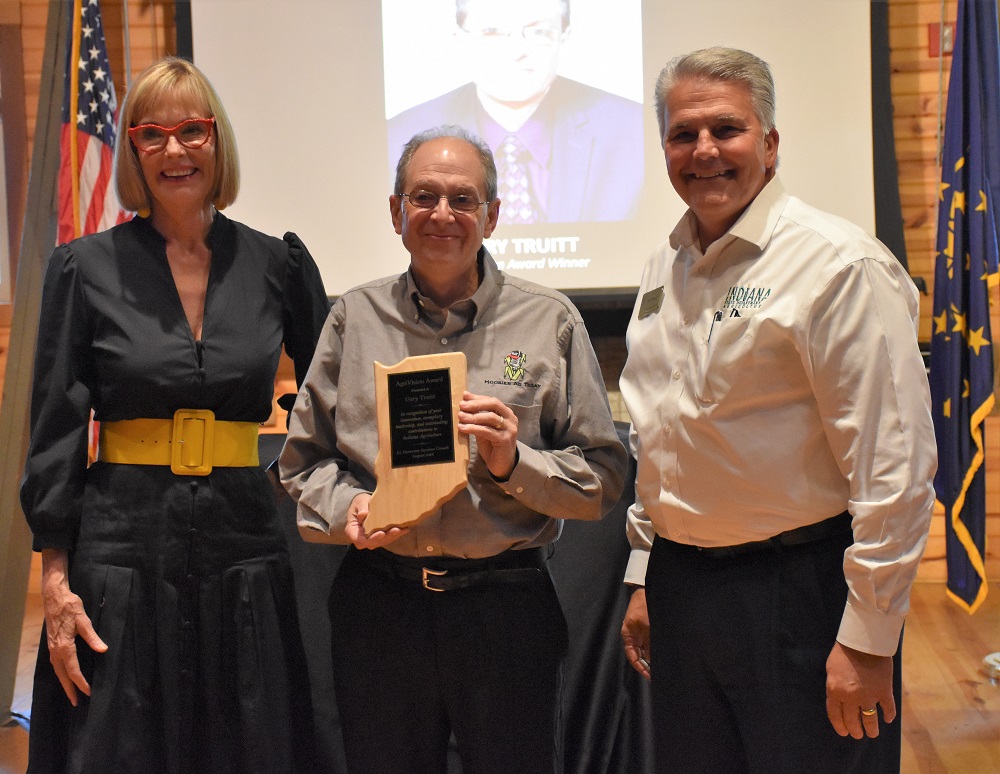 Lt. Gov. Suzanne Crouch presented the awards with a nod to these two additional recipients who have made significant contributions to the industry.

“This year was really special because we were able to recognize two individuals, Gary Truitt and Dr. Plaut, who are incredible leaders but very humble people,” she said. “They never seek the limelight; they never try to be flashy or flamboyant; they do their jobs and they lead in a humble, quiet way, but set an example and are such an inspiration to everyone in the agriculture community. To be able to recognize their contributions, their vision in agriculture, was so rewarding today, I know for me and I know for Hoosiers in agriculture.”

Gary Truitt, who has reported on this event for many of its 16 years, has always been impressed with the credentials and vision of previous winners.

“That’s what makes this award meaningful, is that the people who I have respected, the people who have educated and inspired me throughout the years, get this award. And then to all of a sudden find yourself in that group is very humbling.”

Gary says he’s learned from others the importance of a long-term vision to make a business grow and survive. 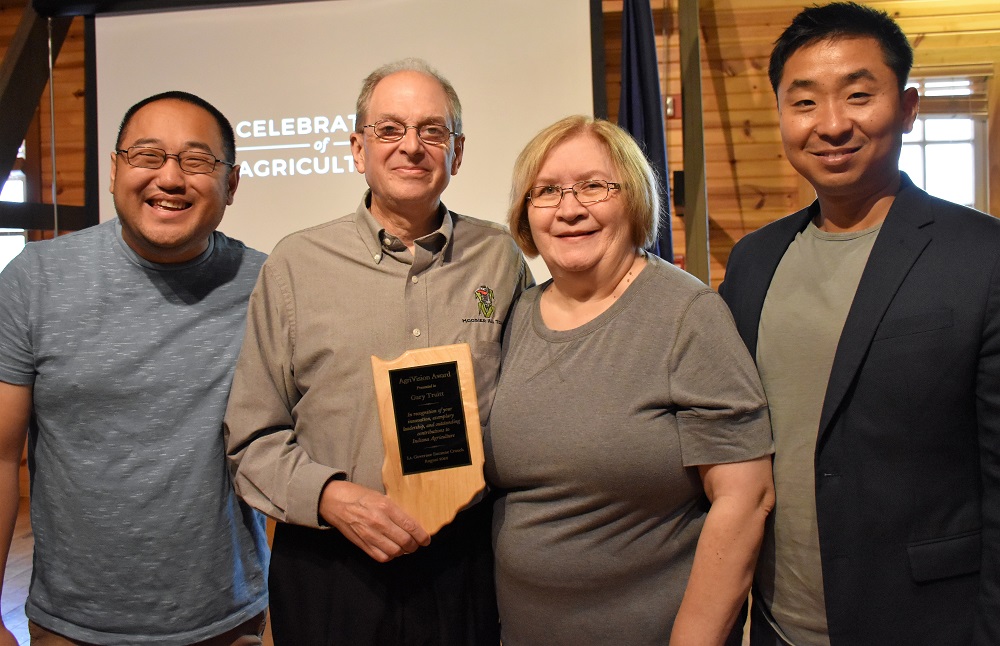 AgriVision recipient Gary Truitt with his son Nate, his wife Kathleen, and his son Jon Truitt.

“That’s so important, to have that vision to look ahead, and farmers have taught me that over the years,” he told HAT. “You really need to look at your farm not only where it is today but where you want it to be in the future. Whether it be the soil or the crops or the finances or being able to pass that farm onto the next generation, it’s all about seeing the future. That’s what vision does and having that vision and sharing that vision with members of your family, members of your community. That’s key and that’s what I’ve tried to do with Hoosier Ag Today.”

Truitt started Hoosier Ag Today in 2006, then in recent years added Michigan Ag Today to the portfolio, and along with Farm World resurrected the old Indianapolis indoor farm show, retooling it as the Indiana Farm Equipment & Technology Expo.

Hear from both AgriVision winners:

Gary Truitt arrived in Indiana in 1985 to begin the first of several ventures all designed to serve Indiana farmers and the agriculture community. The first project was to create the very first of its kind, live, daily farm radio network, serving only the Indiana audience. So was born the Indiana Agribusiness Radio Network, which was later renamed the AgriAmerica Network by new owners Emmis Communications. For his efforts in creating a radio network that touched all parts of Indiana, he was awarded the Farm Broadcaster of the Year from the National Association of Farm Broadcasting in 1988.

In 2006, with that network being sold a year prior by Emmis, and seeing Indiana again void of a state-based farm radio network, Gary founded his second network from the ground up, this time as the principal owner. Hoosier Ag Today is now the most listened to farm network in Indiana with over 70 affiliates statewide.

In 2018, he partnered with Farm World Newspaper to purchase the struggling Indiana/Illinois Farm and Outdoor Power Equipment Show, now named the Indiana Farm Equipment and Technology Expo. After many decades, and again to better serve Indiana farmers, the Expo was moved from its prior location to the new Grand Park Event Center in Westfield, Indiana. Exhibitors and visitors alike praised the move to the new, modern facility in December 2021. The future for this farm show, once on its last leg, looks very promising.

In 2019, Gary saw another opportunity for growth by purchasing the Michigan Agriculture Information Network. Now named Michigan Ag Today, this is another venture that is flourishing under the leadership of Gary Truitt.

Gary has cultivated lasting relationships over the years with national, state, and local farm leaders. He has traveled to 17 countries to bring the story of agriculture back to Hoosiers. His work ethic on the international trips has become legendary.

At present, he is the only two-time winner of the Farm Broadcaster of the Year award. Twenty-seven years after receiving it for the first time, he was honored again in 2015 with Hoosier Ag Today. Additionally in 2020, Gary joined the ranks of other legendary farm broadcasters by being inducted into the National Association of Farm Broadcasting Hall of Fame. This is the highest honor a farm broadcaster can receive within the industry.

Gary has been serving Indiana agriculture since 1985 bringing farmers and agribusinesses the news and information they need each day. This includes the markets, weather, and farm news that farmers rely on daily via their radio, website, the daily podcast offering, and daily newsletter. During this long career, Gary’s devotion has been to his Indiana farmer listening audience and readers. It is his unique media skills and vision that created each of the entities that have endured in economic good times and bad.

“Both ventures run by Gary Truitt and Dr. Plaut are pillars within the Hoosier agriculture industry,” said Bruce Kettler, director of the Indiana State Department of Agriculture. “Their passion is seen well beyond their operations and does not go unnoticed in their community. It is an honor to be awarding these outstanding individuals and recognizing their services to the citizens of Indiana.”