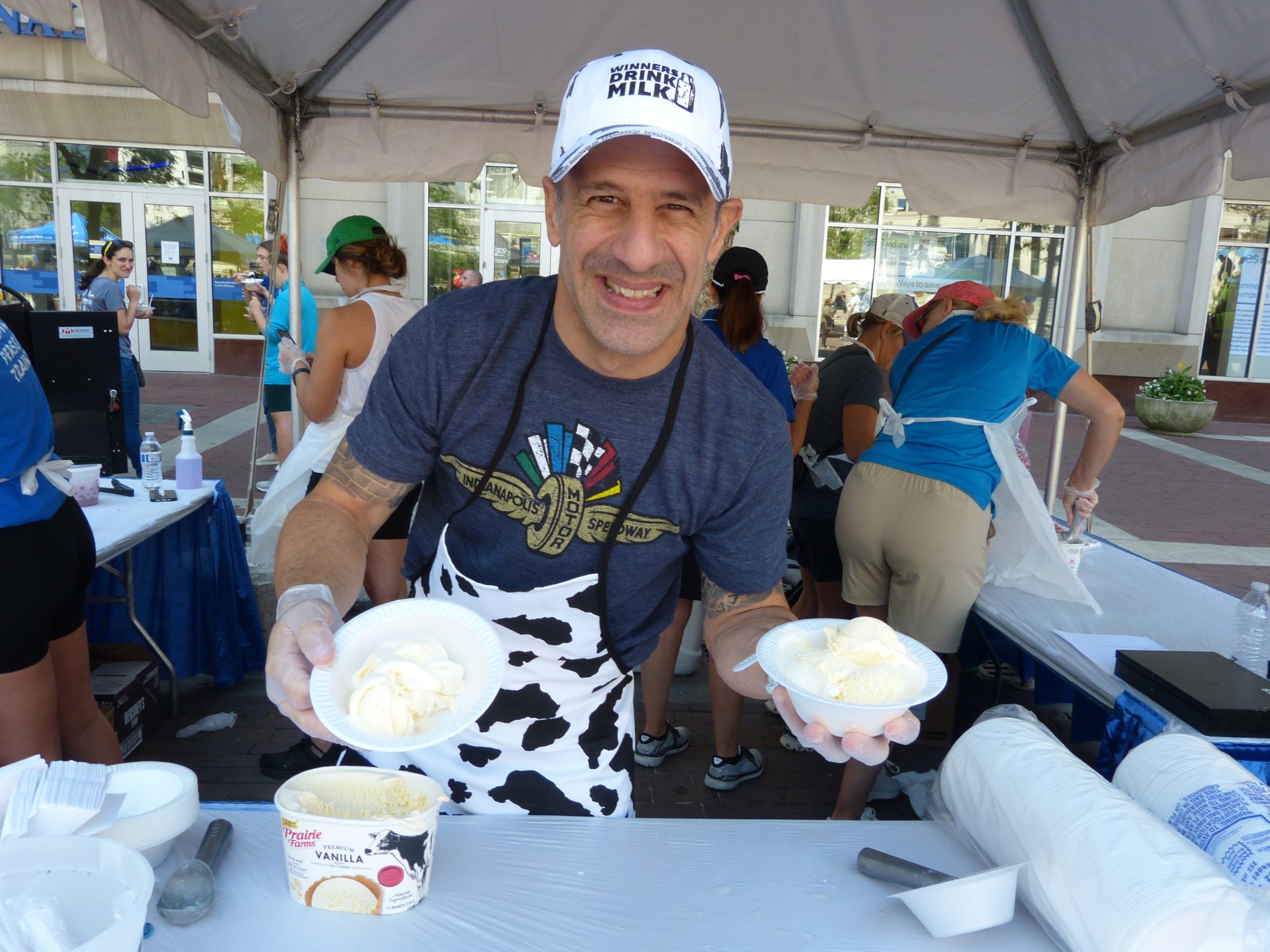 Hundreds of bowls of ice cream were served up at the 33rd Annual Ice Cream Social on Monument Circle in downtown Indianapolis.  The event was presented by American Dairy Association Indiana with proceeds benefiting the YMCA of Greater Indianapolis.

One of the celebrity ice cream “scoopers” working at the event was IndyCar driver and 2013 Indianapolis 500 winner Tony Kanaan.

“We’re serving ice cream for lunch!  It can’t get any better than that,” said Kanaan while he was handing out ice cream sundaes to hungry Hoosiers on their lunch breaks.

“You know, I thought it was a much easier job than it is, but I have to say I got part of my workout done today.”

“Obviously, the American Dairy Association [Indiana] helps the Speedway a lot.  On my 2013 victory, that’s what I got to drink when we got to the Victory Lane so, [I’m] glad to help [and] glad to give back to the community.”

Is Tony Kanaan a fan of ice cream?

“Who’s not?  I love ice cream!  I have four kids.  We probably have ice cream everyday at home.”

After a race, what’s the IndyCar driver’s favorite flavor of ice cream?

“I’m very plain.  [It’s] vanilla for me with a little bit of toppings.  You can’t go wrong with vanilla!”

Two of the other big celebrities at the Ice Cream Social were ‘Lavern’ and ‘Shirley’ – two Holstein dairy calves from Purdue’s Dairy Club named after the characters made famous by Penny Marshall and Cindy Williams.

The calves were there to serve as a teaching tool to help folks learn more about where the milk in that bowl of ice cream comes from.

“There are a whole lot of steps that go between the time that the calf is even born to even when they can start to produce milk,” says Liz Byers, Advisor with the Purdue Dairy Club.  “So, we’ve been able to have a lot of conversations about that process of how cows grow [and] how they [are] milked.  Also, it’s really cool because then [folks] can see a dairy cow while they’re eating ice cream [and] while they’re having a conversation with the dairy farmer, and it’s just a really unique afternoon.”

Click BELOW to hear C.J. Miller’s exclusive interview with IndyCar driver and 2013 Indianapolis 500 winner Tony Kanaan as he served as a celebrity ice cream “scooper” during the American Dairy Association’s Ice Cream Social. 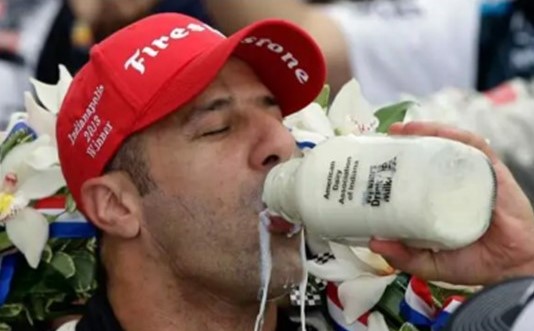 Proving that “Winners Drink Milk!” — Tony Kanaan in 2013 enjoying an ice-cold bottle of milk immediately after winning the 97th Running of the Indianapolis 500.