Another Iowa Derecho This Week 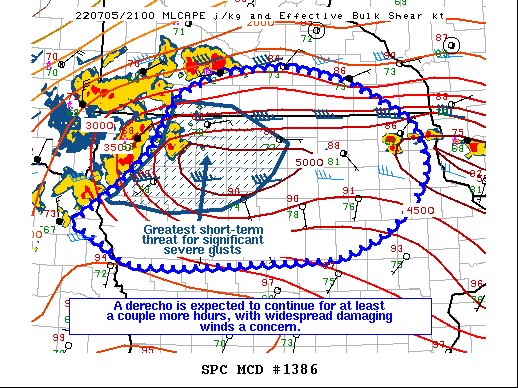 It wasn’t that long ago that many of us had never heard the word “derecho”, but now Iowa has seen three of them in the past three years. Dr. Justin Glisan, Iowa State climatologist, says this particular storm earlier this week started in South Dakota and moved into northern Iowa.

“We had the initial wind and some hail reports in west-central South Dakota, and then we saw the line start to expand north and south. You get more wind reports as the derecho moves southeast, losing some power as it entered Iowa, but definitely, you see a long path. The definition of a derecho is a path length of 400 miles or more, 60 miles is the distance from, let’s say, north to south, and then, within that polygon that the derecho line makes, you have to have a substantial amount of 58 mile per hour wind gusts or above to classify it as a derecho. So, we definitely reached that peak.”

The storm damaged structures and crops in both states. Glisan says the wind was punching unfilled grain bins and denting them.

“We’ve also seen flattened corn, some lodged corn, and then, we don’t think about this often, but these derechos also produced hail: tennis ball-sized hail in South Dakota but also that smaller hail, marble and pea-sized hail, that’s being blown by 80 or 90 miles per hour winds. That’s like machine-gun fire through those corn and soybean leaves, so we’ve seen some shredded crop out there. Looking across northern Iowa, we’ve had some lodged corn, some flattened corn.”

Glisan adds that it’ll take a few days to figure out if this corn is going to stand back up. As the storm was forming, Glisan feared the storm would be far worse. Thankfully, it wasn’t.