When you think of pork, you might think of pork chops, pork roast or pork tenderloins.  But, at the “Taste of Elegance” event Monday at the Indiana Roof Ballroom in downtown Indianapolis, there were far more creative pork dishes on display.

The event was organized by the Indiana Pork Producers Association, who brought in six chefs to compete for a grand prize of $1,000 cash.

Among the chefs competing were Joel Scott with Spoke and Steel who prepared a Ginger-brazed Pork Belly.  Craig Mariutto with College Chef used a Mardi Gras theme to tie together pork and crawfish by creating a Crawfish Dressing Tasso Po-Boy. 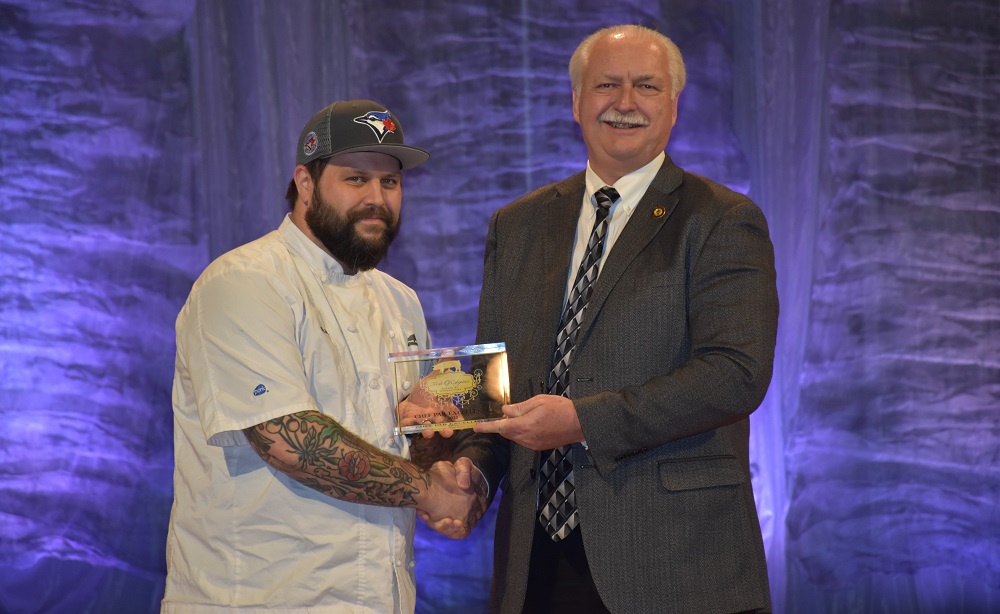 The top prize of the night went to Alan Sternberg (shown above with Randy Kron, President of Indiana Farm Bureau) with Iozzo’s Garden of Italy restaurant near downtown Indianapolis.  Chef Sternberg put together a Pork Wellington for the judges and a Roasted Pork and Pepper Ragù for the guests in attendance.

Chef Sternberg says the options for using pork as an entrée are limitless.

“The whole animal is delicious from literally [the] nose to the tail [and] everything in between.  The better we can use the different parts of the animal and not just going after those premium cuts, the better [it is] for the farmer and the better for us.  Hopefully we [can] expand more pallets and expand more minds,” says Sternberg.

If you like to try some new and exciting pork recipes for yourself, click HERE for ForkMorePork.com, presented by Indiana Pork.

Click BELOW to hear C.J. Miller’s report from “The Taste of Elegance” event at the Indiana Roof Ballroom in downtown Indianapolis.