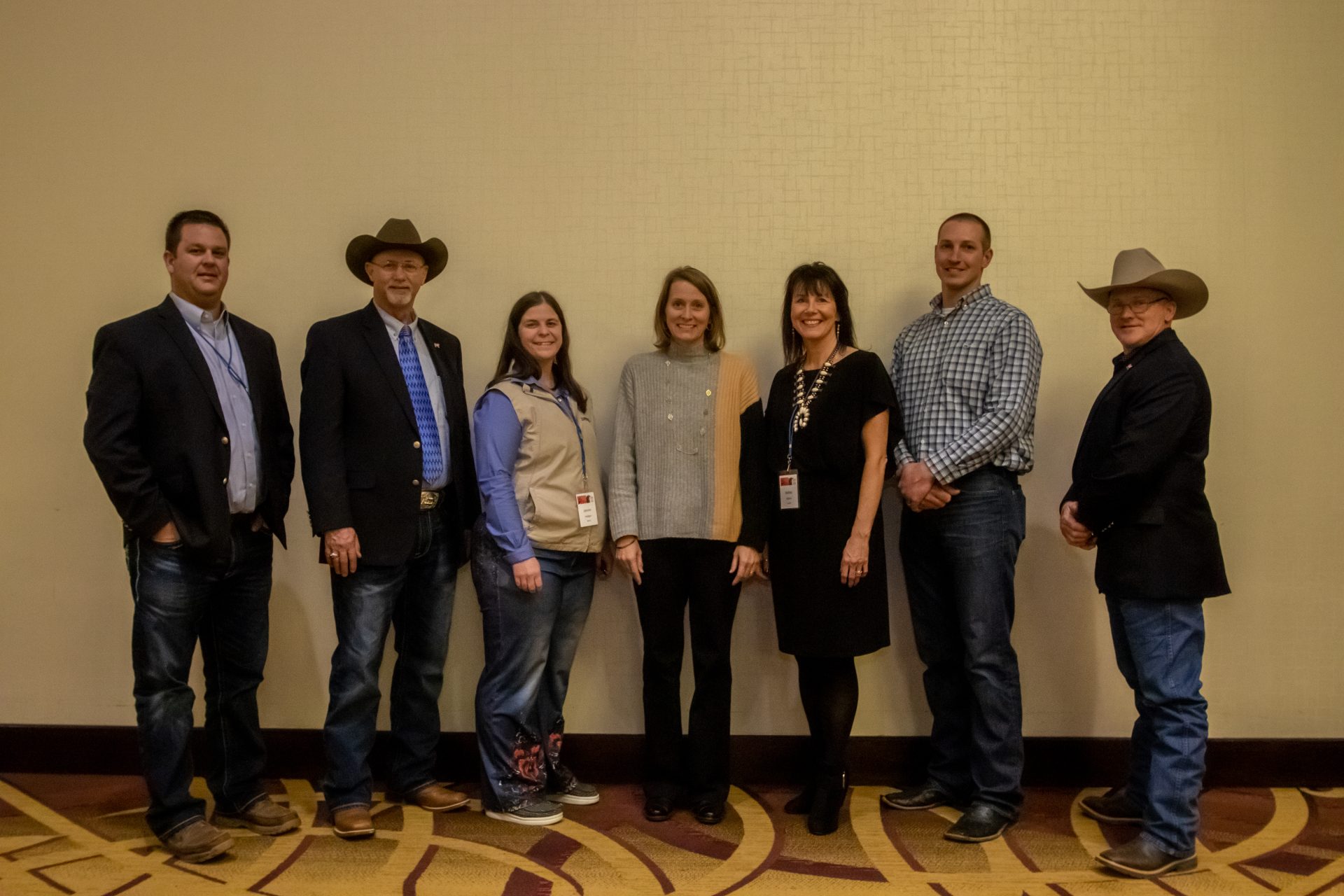 During the recent convention at the Sheraton Hotel on January 29th, the IBCA membership elected officers for 2022-2023.  The new officers approved by the membership were: President- Jill Duncan of Wingate, President-Elect- Jeff Sherfield of Spencer; Vice President- Kelley Sheiss of Larwill and Treasurer- Andrew Stewart of Greensburg. Also serving on the Executive Committee with the officers are Promotions Committee Chair, Dr. Jennie Hodgen, Membership Chair, Tim Schwab and Immediate Past President, Chad Lanum.

The IBCA Board of Directors is made up of 10 Area Directors as well as representatives from dairy, veal and allied industries.  These local producer leaders serve on the board for the IBCA as well as the Indiana Beef Council (IBC) to manage the collection and allocation of the Beef Checkoff.

Also at their convention this past weekend, IBCA honored the state’s top cattlemen and women.

At the awards banquet, the Top Hand Award is given to the member who recruited the highest number of new IBCA members during the past year. For 2021 it was awarded to Jeff Sherfield of Spencer. 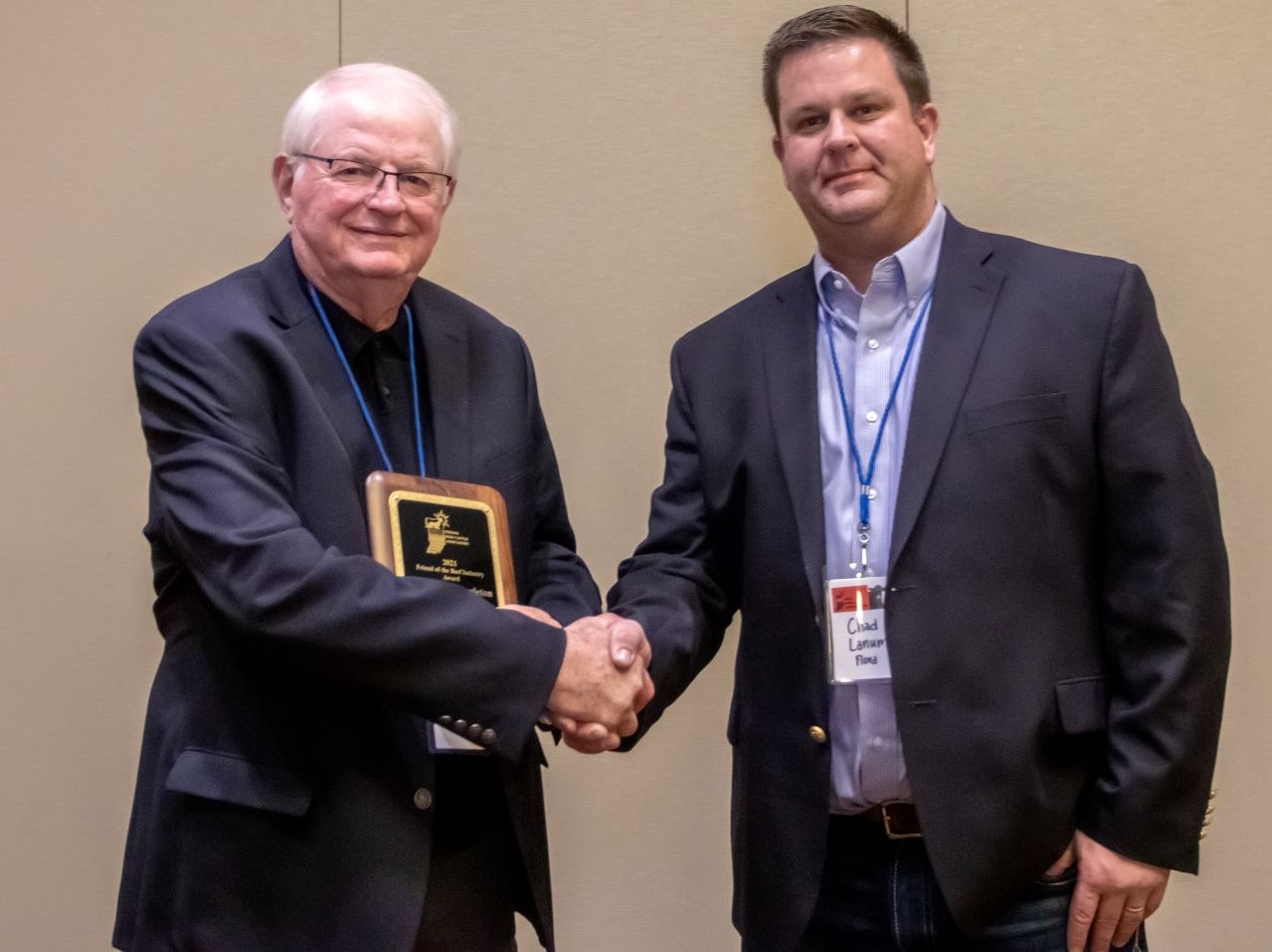 The IBCA Friend of the Industry Award was given to Dr. Wayne Singleton. Dr. Singleton is a Professor Emeritus of Animal Sciences at Purdue University.  He served a crucial role of teaching the next generation of the beef industry about reproductive physiology while they attend classes at Purdue.  For over 40 years, he has and continues to serve as the one of the individuals in charge of the breeding soundness exams at the Indiana Beef Evaluation Program. 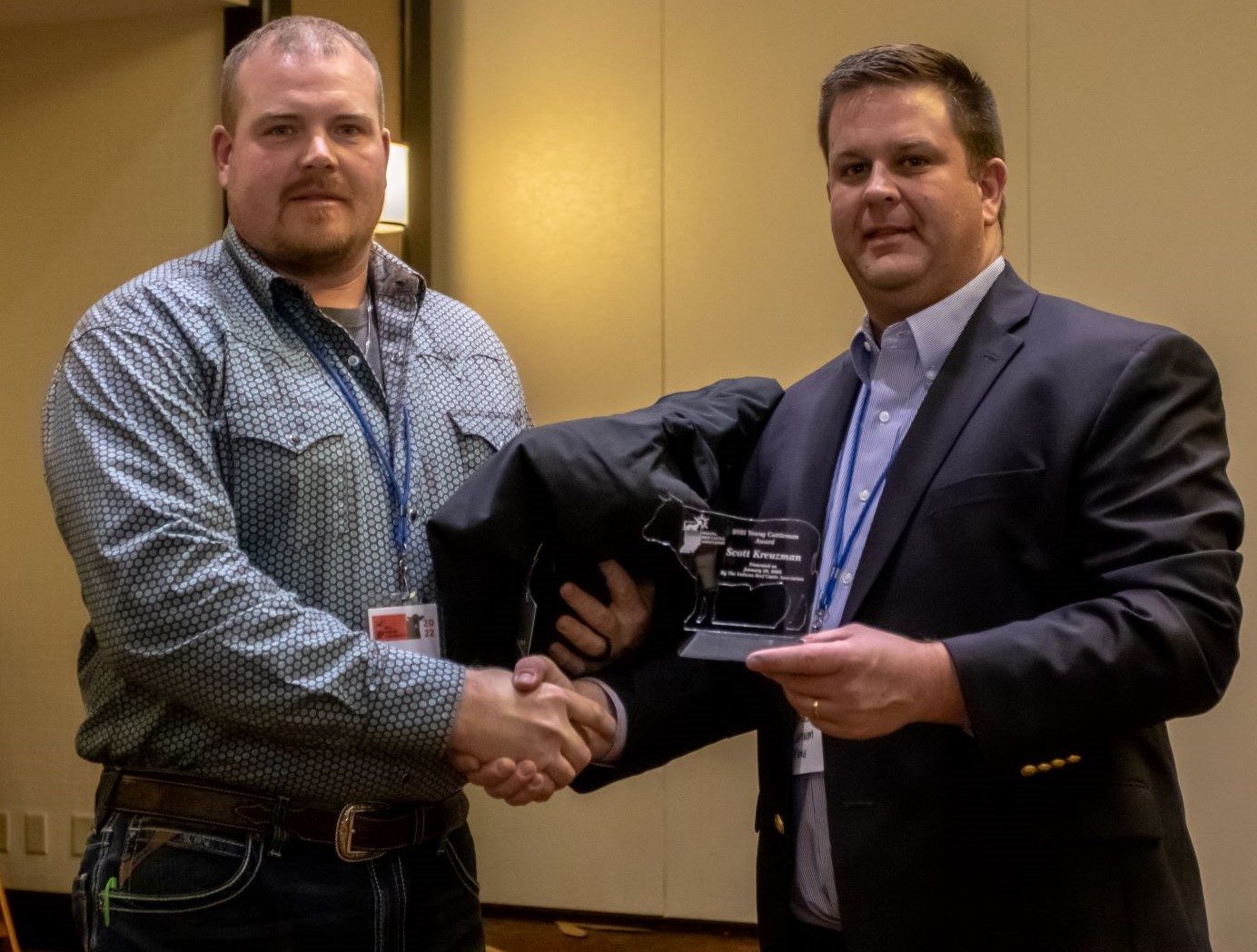 Honoring cattlemen and women who possess beef management skills and leadership abilities, the IBCA awarded the 2021 Outstanding Young Cattleman of the Year to Scott Kreuzman of Batesville. In addition to the farm, Scott operates a consulting business which specializes in livestock facility permitting and compliance work. 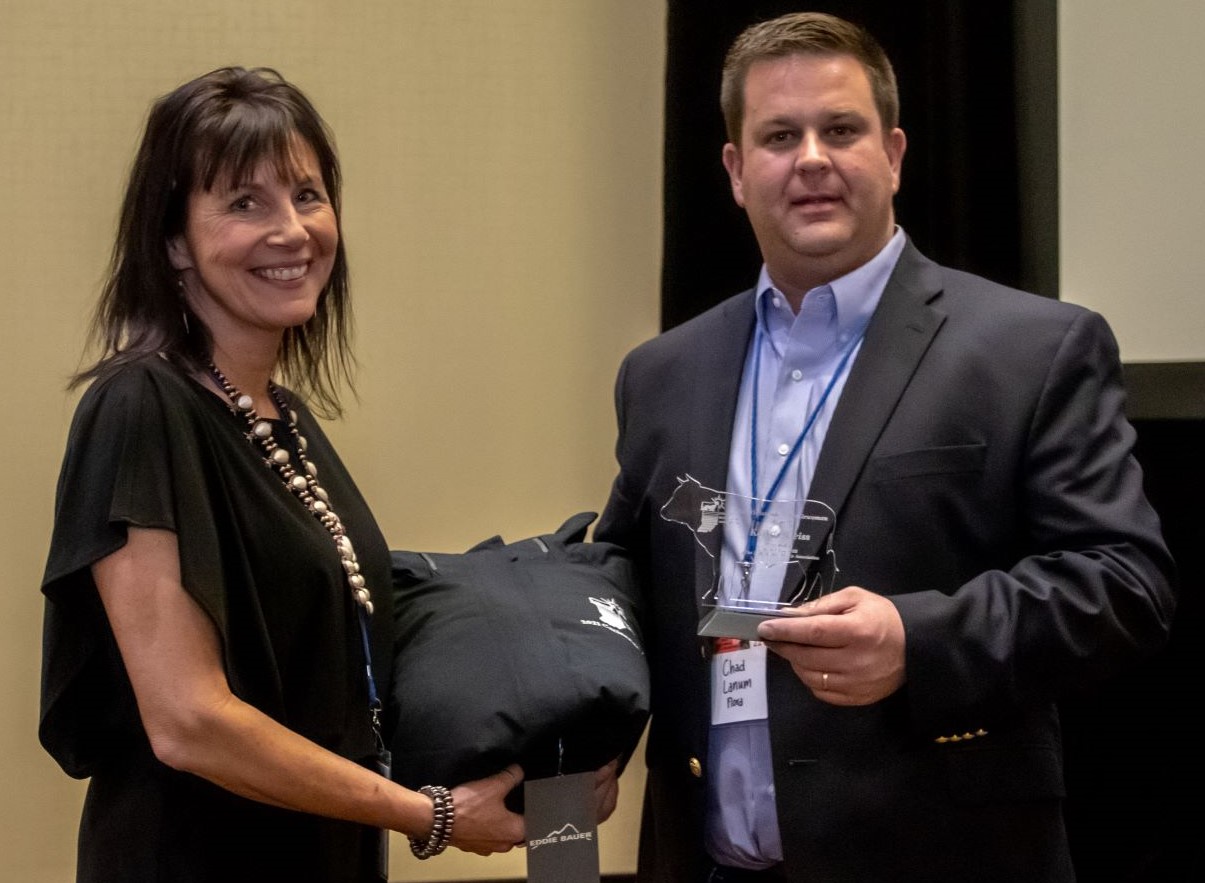 The prestigious Outstanding Cattlewoman of the Year Award was presented to Kelley Sheiss. Kelley, her husband Donnie and their son Dillon have a full-time family farming operation ”3D Stock Farms” north of Larwill. It encompasses a farrow-to-finish swine operation, 75 head of brood cows, some of the best show poultry in the world and they farm approximately 1,000 acres of corn, soybeans, wheat, and hay. 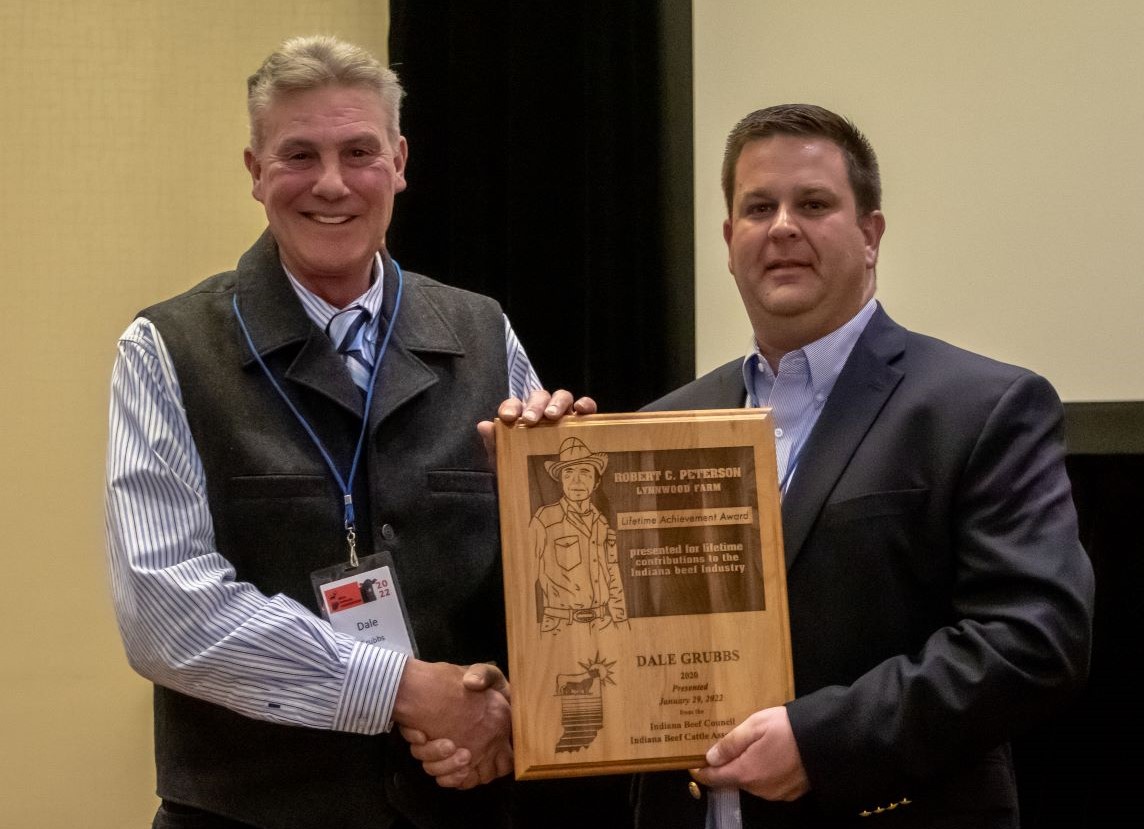 The most esteemed award each year is the coveted Robert C. Peterson Lifetime Achievement Award. This year the IBCA awarded the honor for 2020 to Dale Grubbs of Hillsboro. For the many years, Grubbs Angus has been in the top of cattle registrations in Indiana with the American Angus Association. He has been breeding Angus cattle for over 30 years and produced several National and State champions. 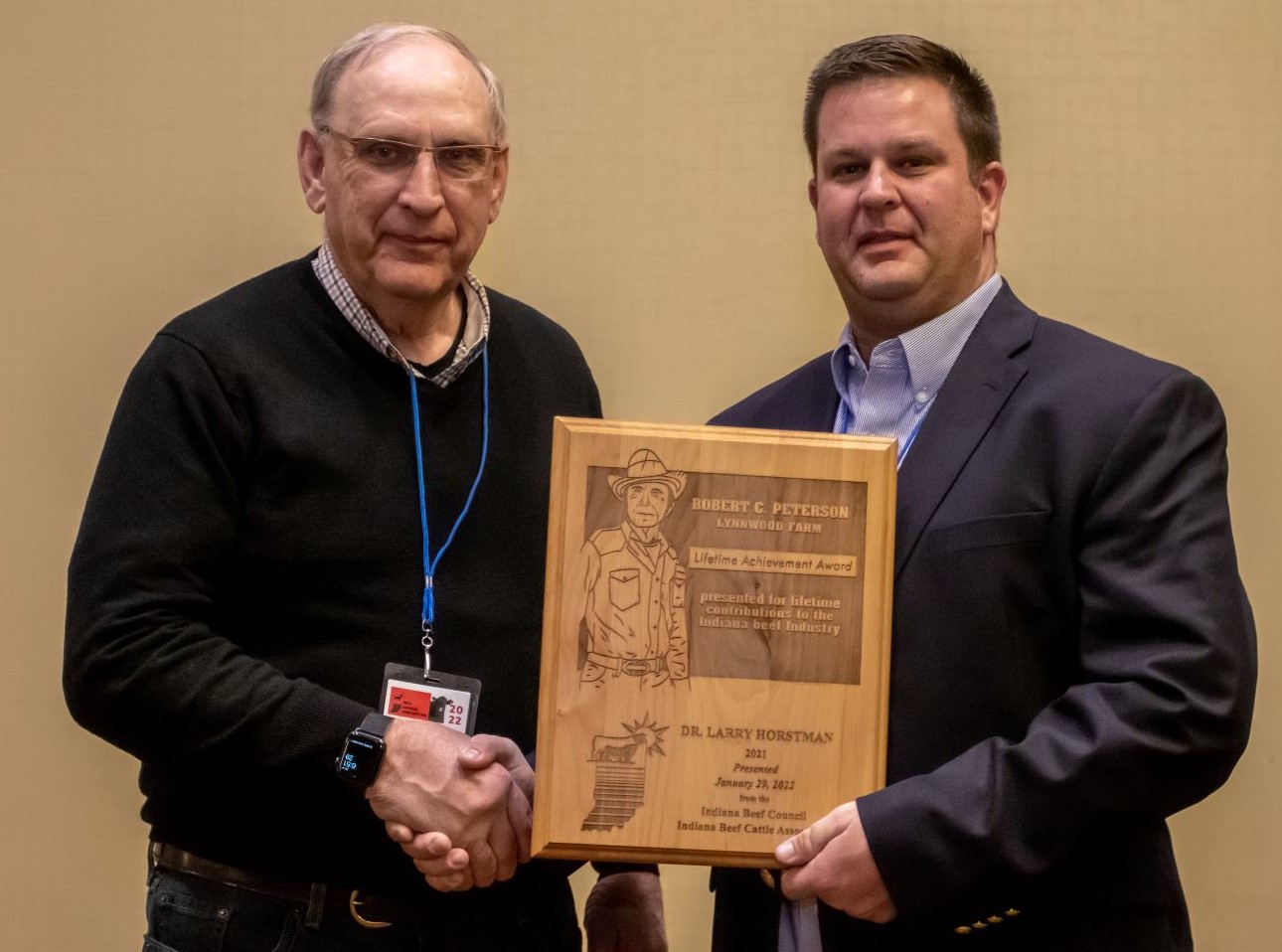 For 2021, the award was given to Dr. Larry Horstman of West Lafayette. Community minded, and always the teacher, “Doc” has had a significant impact on the education of cattle producers and exhibitors of the state. He has been the authority on reproduction at the IBEP Bull Tests and the State Fair champions testing. His impact and legacy reach well beyond the training of his vet students.