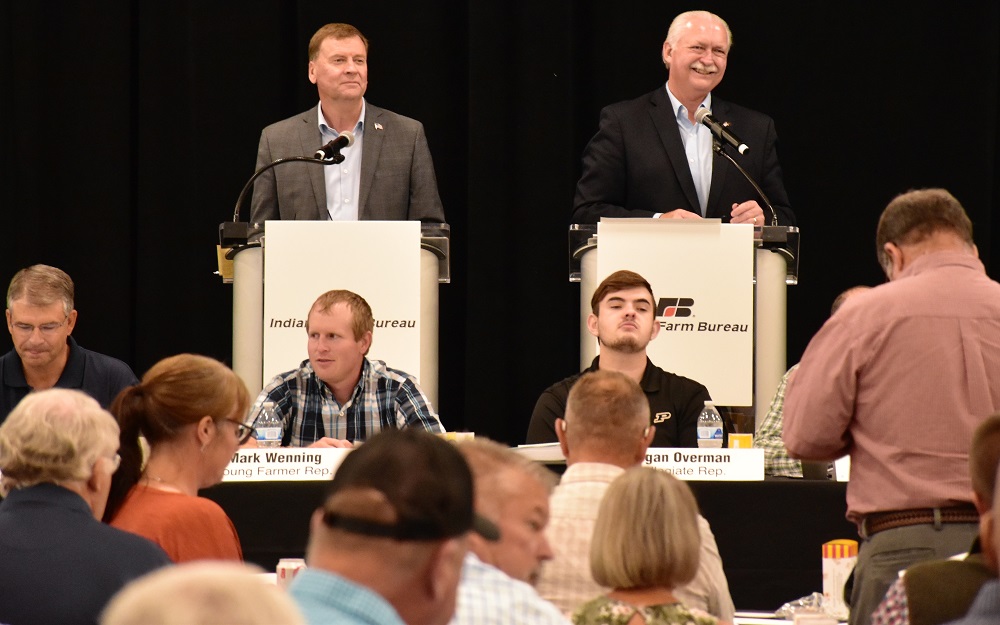 It was true grass roots at work Saturday in Hendricks County when 234 Indiana Farm Bureau member delegates met to discuss and debate policy positions that should be part of their work in 2023. There was passionate discussion on a range of farm issues, and INFB vice president Kendell Culp said one of those involves Grain Buyers Warehouse Licensing Agency.

“We had several resolutions from Huntington County, from Wells County up in that Salamonie area where they had grain failures a year and a half ago or so.”

Culp explained the concern is over grain elevators that are under water financially and farmers delivering grain to such a facility without that knowledge, while the state licensing agency does have that intelligence.

“And so there are concerns and there need to be audits done,” Culp told HAT. “But even as audits are done, as was pointed out today, then the next year after the audit, they close their doors and then these farmers are at risk. The Grain Indemnity Fund is funded by the farmers obviously to help in those certain situations, but they don’t cover 100% of the loss. And so we need to make sure that we continue to represent our members and the needs of those producers to make sure that there’s confidence when they deliver the grain. They’re delivering it to a grain warehouse that’s licensed by Indiana, and they want to know that there’s confidence in knowing that license means that they’re solvent.”

Culp explained that INFB supports the current audit process, but “I think there needs to be more transparency in that process. We have the Grain Indemnity Board and there are farmers that make up that as well as others, warehouse owners, but Indiana Farm Bureau has a couple seats on that. Well they are not privy to the information of what grain elevators are under water and in financial problem. Somebody some needs to have oversight on that besides just the regulatory employees.”

So, after much discussion, language was added to the policy book so producers ultimately can have more confidence in their grain-buying warehouse or elevator.

Also discussed Saturday…further support of policy on promoting high quality broadband to every acre, and office of state chemist rules on portable storage containers. Those stories in the coming days from HAT.