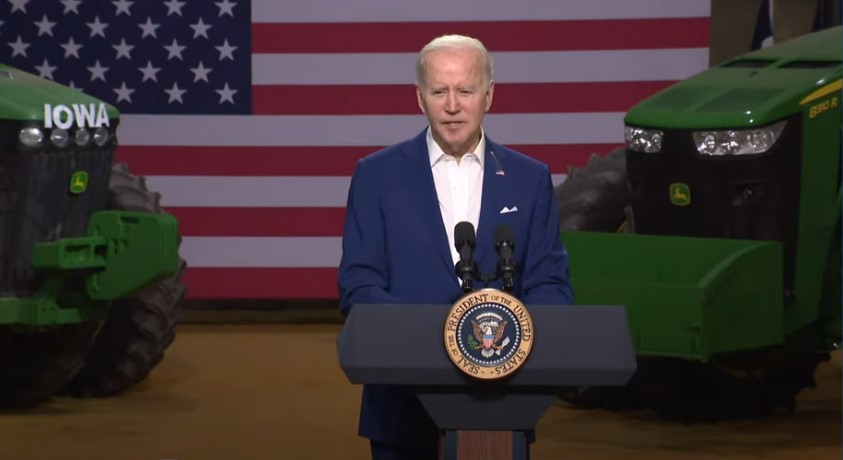 President Biden announced the country’s restrictions on E15 will be lifted for the 2022 summer driving season.

During a visit at a POET plant in Menlo, Iowa, Biden announced this latest effort to ease the pain consumers are feeling at the pump.

The EPA is issuing a national emergency waiver, which will allow E15 to be sold at gas stations around the country from June 1 to September 15.

“E15 is about 10 cents a gallon cheaper than E10, and some gas stations offer an even bigger discount,” says Biden. “You’re going to be able to keep filling up with E15, and it’s going to solve a whole problem. But it’s not going to solve all our problems. It’s going to help some, and I’m committed to doing whatever I can to help, even if it’s an extra buck or two in the pockets when they fill up will make a difference in peoples’ lives.”

In 2019, former President Trump cleared the path for year-round E15 sale. However, it was overruled in federal court, saying the EPA exceeded its authority. Emily Skor, CEO of Growth Energy, says the organization is focused on making this effort permanent.

“It gets us through the summer, but we’ve got 12 months,” she says. “We’ve got to make this a permanent fix. We will continue to work with our bipartisan champions in the House and Senate. We’ve got a core cadre of champions that continues to be very vocal, very visible, and very smart—making sure we inject ourselves into the national conversation. We look forward to working with them so we can make this a permanent fix once and for all.”

Other national organizations are applauding this move as well.

“AFBF appreciates President Biden’s decision to expand the availability of ethanol through year-round E15 sales,” says Zippy Duvall, president of the American Farm Bureau Federation. “America’s families are enduring record-high gas prices, and taking advantage of domestically produced fuels will not only drive down costs at the pump, it will also reduce dependence on foreign crude oil.”

In a statement, Randy Kron, president of Indiana Farm Bureau, says the organization is grateful the Biden administration has listened the ag industry to lift summertime restrictions on E15 gasoline sales.

“A higher blend of ethanol at the pump would reduce costs to consumers and benefit a large number of Hoosier farmers,” says Kron. “Indiana has 15 ethanol plants, and about 45% of the corn we grow goes into ethanol. Ethanol represents a critical market for our members and the ethanol industry supports many jobs in our rural communities. Reducing our dependence on foreign crude oil will boost our economy and keep rural Indiana and rural America viable.”

According to the Indiana Corn Growers Association, Indiana ranks as the fifth-largest producer of U.S. ethanol, generating more than 1.2 billion gallons per year. The Hoosier State produces nearly 8 percent of the total U.S. ethanol output. There are 14 ethanol plants in the state. Collectively, these ethanol plants consume about 47 percent of Indiana’s total corn crop – more than 461 million bushels.

“Ethanol adds billions of gallons to the U.S. fuel supply every year, lowering demand for high-cost oil while increasing total fuel available to American motorists,” said ICGA President Scott Smith, a farmer from Windfall, Ind. “Ethanol has been priced an average of 80 cents less per gallon than unblended gasoline at wholesale through March, and drivers currently save up to 20 cents or more per gallon where E15 is available…Farmers stand ready to continue working with the EPA, the Biden Administration and Congress on the energy and environmental solutions that ethanol can provide.”

“Increasing home-grown cleaner fuel from American producers will help lower costs at the pump for everyone,” she says. “President Biden is taking on Putin’s price hike by tapping into American energy technology with biofuels our farmers make right here at home.”