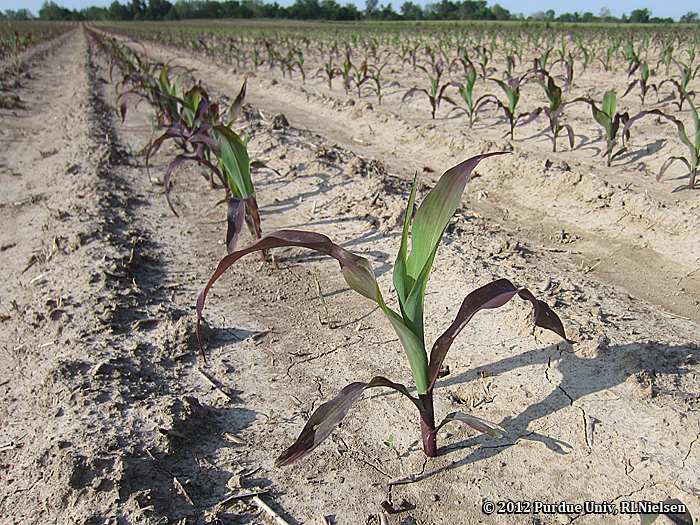 Like the swallows that return every year to San Juan Capistrano, it seems that purpling of young corn plants returns every year to more than a few fields in Indiana. While ornamentally attractive, the sudden appearance of the pretty purplish hue in young corn fields, clearly evident from the window of the pickup tooling down country roads at 60 mph, often causes grief and consternation for landlords and tenants alike because we all know that “corn ain’t supposed to be purple!”

Biochemical Cause of Purpling. Purpling of corn plant tissue results from the formation of reddish-purple anthocyanin pigments that occur in the form of water-soluble cyanidin glucosides or pelargonidin glucosides. A hybrid’s genetic makeup determines whether corn plants are capable of producing anthocyanin. A hybrid may have none, one, or many genes that can trigger production of anthocyanin. That is the reason why purpling may appear in only one of two hybrids planted in the same field. Purpling can also appear in the silks, anthers and even coleoptile tips of a corn plant. The reddish-purple prevalent in some varieties of Indiana corn also results from anthocyanin accumulation. 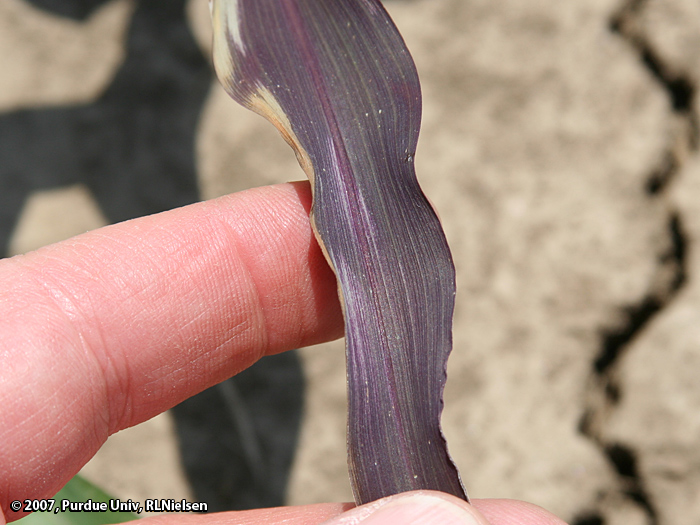 Agronomic Cause of Purpling. Well, you may say, that’s fine but what triggers the production of the anthocyanin pigments in young corn at this time of year? The answer is not clearly understood, but most agree that these pigments develop in young plants in direct response to a number of stresses that limit the plants’ ability to fully utilize the photosynthates produced during the day.

It has been my experience that the most common factors that correlate with the development of purple corn plants is the combination of bright, sunny days and less than favorable cool nights (40’s to 50’s F) when corn plants are in the V3 to V6 stages of development (3- to 6-leaf collar stages). This combination translates to a lot of photosynthate produced during the day, but low rates of photosynthate metabolism during the night. That combination of weather factors results in high concentrations of sugary photosynthates in the leaves. Since the anthocyanin occurs in the form of a sugar-containing glucoside, the availability of high concentrations of sugar in the leaves (photosynthesis during bright, sunny days) encourages the pigment formation. Hybrids with more anthocyanin-producing genes will purple more greatly than those with fewer “purpling” genes. In most cases, the purpling will slowly disappear as temperatures warm and the plants transition into the rapid growth phase (post-V6).

Other stresses that restrict photosynthate metabolism in young corn plants and result in purple corn include several that restrict root growth, including herbicide injury, soil phosphorus deficiency, soil compaction caused by tillage or planter traffic, excessively wet soils, excessively dry soils, insect injury, and disease injury. The negative effects of such root stresses on photosynthate metabolism can amplify the intensity of the purpling already triggered by a combination of cool nights and bright, sunny days.

Does the Leaf Purpling Result in Yield Losses? It is important to recognize that the cause of leaf purpling, not the purpling itself, will determine whether yield loss will occur. If the main cause is simply the combination of bright, sunny days and cool nights, then the purpling will disappear as the plants develop further, with no effects on yield.

If the primary cause of the purpling is the hybrid’s genetic response to the combination of cool nights and bright, sunny days, then the purpling symptoms will be more spatially uniform throughout a field. If other stress factors are also restricting root development and/or function, then the purpling symptoms may be spatially variable throughout the field and correlated to soil type, drainage characteristics, or elevation of the landscape. Spatially variable patterns of purple corn may indicate the potential for lingering, yield-limiting stresses that should be more thoroughly investigated.

BOTTOM LINE: Purpling of corn plant tissue, by itself, does not decrease yield. The cause of the purpling determines whether yield loss will eventually occur.