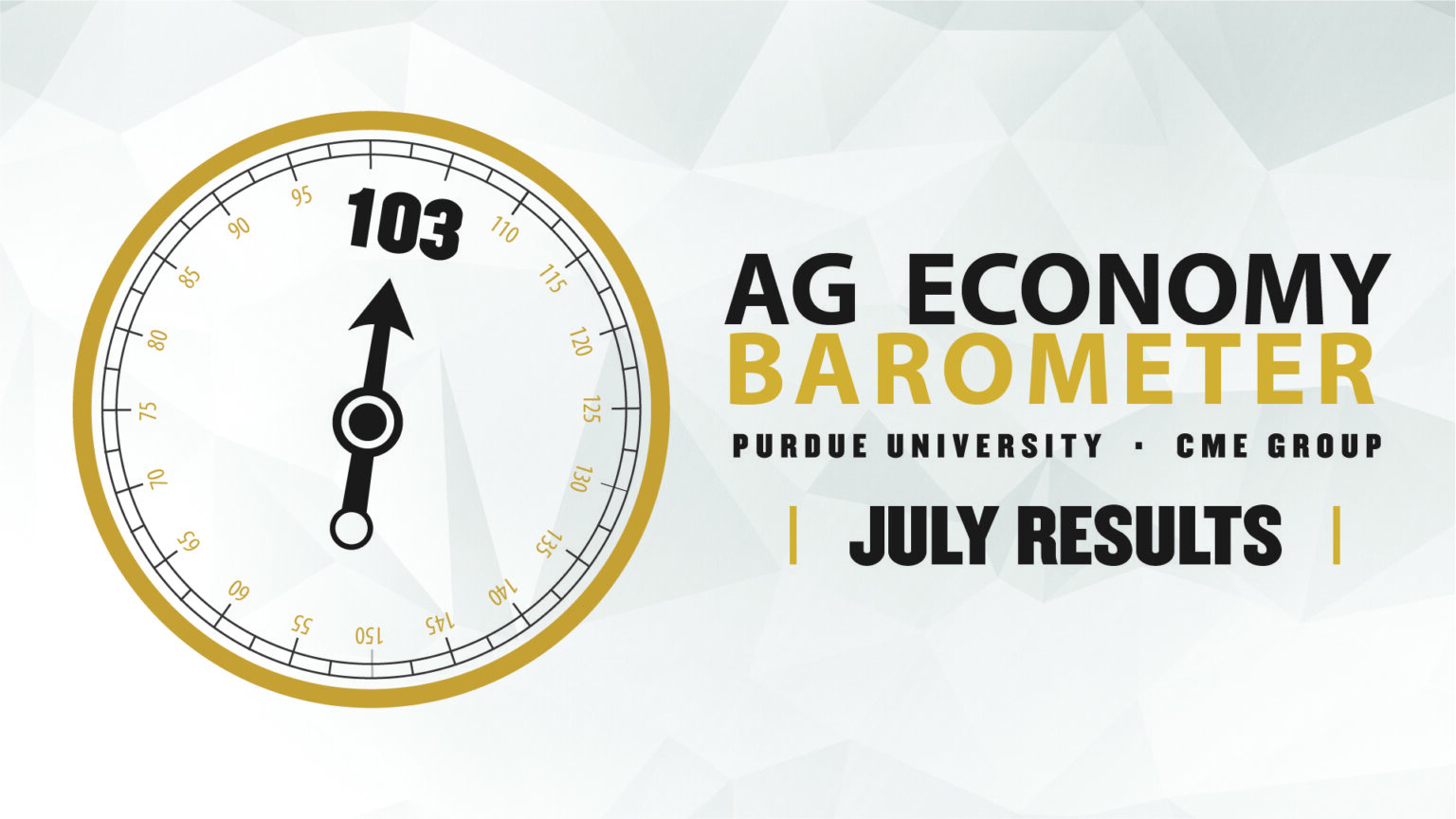 The Purdue University/CME Group Ag Economy Barometer farmer sentiment index rose six points in July to a reading of 103. Producers were somewhat more optimistic about both current and future economic conditions on their farms when compared to June.

The Index of Current Conditions rose 10 points to a reading of 109, and the Index of Future Expectations rose 4 points to a reading of 100. Although all three indices rose this month, they were still 23% to 24% lower than a year earlier. The Ag Economy Barometer is calculated each month from 400 U.S. agricultural producers’ responses to a telephone survey. This month’s survey was conducted July 11-15. 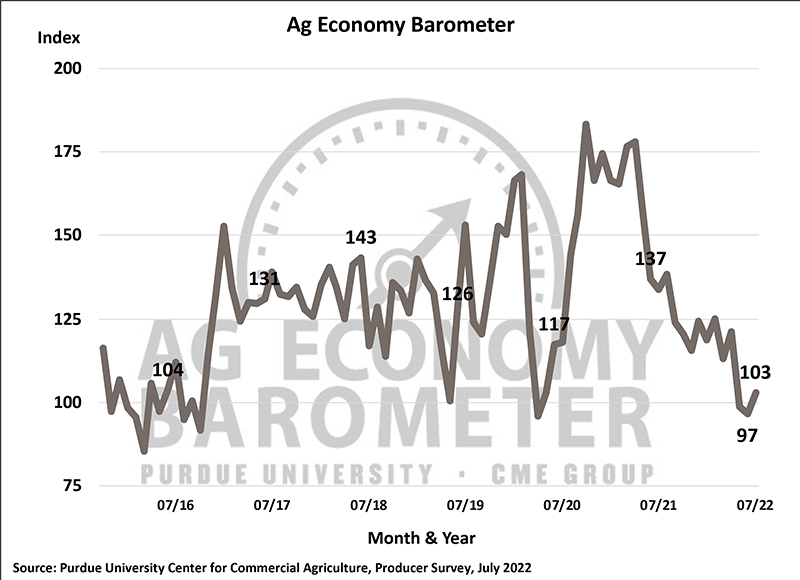 “Even though we saw a slight uptick in sentiment this month, there is still a tremendous amount of uncertainty in the agricultural economy,” said James Mintert, the barometer’s principal investigator and director of Purdue University’s Center for Commercial Agriculture. “Key commodity prices, including wheat, corn and soybeans, all weakened during the month and producers remain concerned over rising input prices and input availability.”

The Farm Financial Performance Index, which is primarily reflective of income expectations for the current year, improved 5 points to a reading of 88 in June. However, this month, 49% of respondents said they expect their farm to be worse off financially a year from now, which compares to 51% who felt that way in June. This is a markedly more pessimistic outlook than producers provided a year ago when just 30% of respondents said they expect their financial condition to worsen in the upcoming year.

The rise in input costs is leading some producers to reassess their cropping plans for the upcoming year. In this month’s survey, nearly one out of four (24%) of crop producers said that as a result of the rise in input costs, they plan to change their farm’s crop mix in 2023. In a follow-up question, over half (53%) of respondents who said they plan to change their mix will increase the percentage of their cropland devoted to soybeans. In a separate set of questions, 26% of producers who said they planted winter wheat last year indicated they plan to increase their wheat acreage this fall.

The Farm Capital Investment Index remains near its record low, up one point to a reading of 36 in July. To shed light on why, respondents who said now is a bad time for large investments were asked for the primary reason they felt that way. Of those respondents, 44% indicated an “increase in prices for farm machinery and new construction,” 15% said “uncertainty about farm profitability,” and 14% chose “rising interest rates” as the primary reason they viewed now as a bad time for large investments. Somewhat surprisingly, only 7% of respondents chose “tight farm machinery inventories at dealers” as their primary reason for responding negatively to the investment question.

Producers’ views on farmland values diverged this month as the Short-Term Farmland Value Index declined 9 points to 127, while the long-term index rose 9 points to 150. The short-term index is down 20% from its peak reading in 2021, while the long-term index is only 6% lower than the peak reached last year. Short-term, there was a shift away from expectations that farmland values will go higher, with more producers in July expecting values to remain about the same. The long-term change was attributable to more respondents this month expecting values to rise with fewer expecting a decline over the next five years.