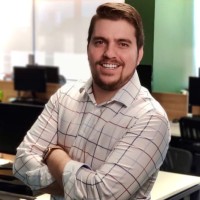 Robots are quickly being integrated into the day-to-day operations of agriculture. One example of the new use of robots for the farm comes from a company in Indiana that has just unveiled a robot that handles herbicide applications.

Solinftec, which has its U.S. headquarters in West Lafayette, is expanding its ag robotics technology by introducing its autonomous Solix Sprayer robot.

Leonardo Carvalho is the Director of Operations with Solinftec.  He says their new Solix Sprayer robot does more than just spray for weeds. It can also scout and detect those weeds that are affecting your farm field.

“In just one pass, we can do the spot spray application, we can be scouting, and you can see the health of the crops,” says Carvalho, who adds that the robot weighs significantly less than a typical sprayer, which can lower soil compaction.

“This robot is so light, less than a thousand pounds, and we can reduce the soil compaction, as well as help the environment,” says Carvalho.

The company says the robot can cover 96 acres per day depending on terrain. The sprayer height is adjustable, allowing to spray corn up to five-feet-tall.

Solinftec says it has teamed up the McKinney Corporation, which is also based in Tippecanoe County, to mass produce and manufacture the Solix Sprayer robot.

The spray robot is powered by four solar panels that control the drive system and the spray system while providing reports on crop populations, as well as detecting weeds, diseases, insects and nutrient deficiencies.

The robots are expected to be available in 2023.

Click BELOW to hear C.J. Miller’s news report on the new use of robots for the farm with Solinftec’s Solix Sprayer robot.