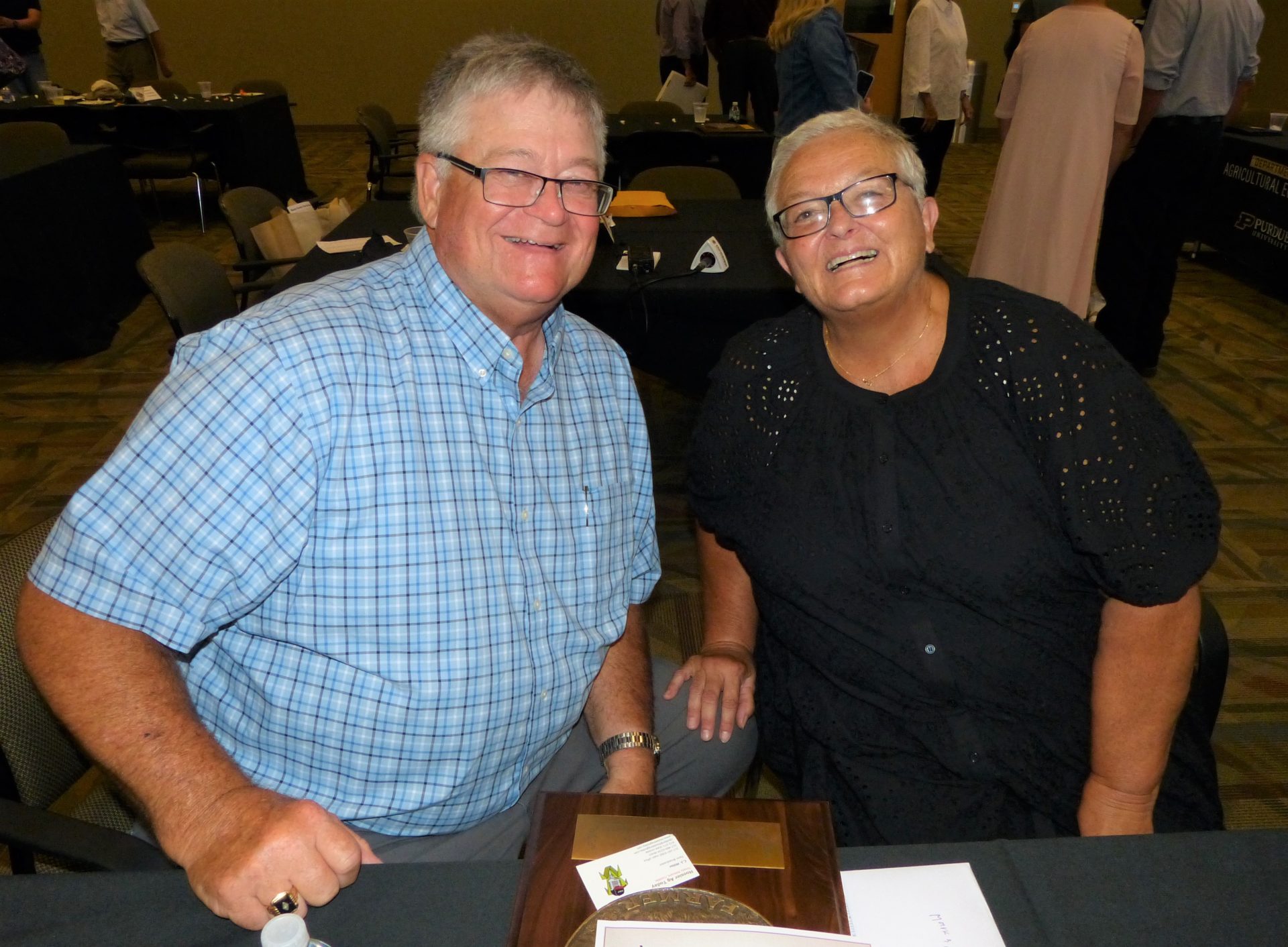 Mark and Sheryl Seib of Posey County after receiving the “Master Farmer Award” at Beck’s Hybrids in Atlanta, Indiana in July 2022. The Seibs first met and fell in love at the Indiana State Fair in 1976. Photo: C.J. Miller / Hoosier Ag Today.

The Indiana State Fair kicks off on Friday – And for many, it is a special place and event that brings the state’s entire ag community together and creates new memories every year that last a lifetime.  For Mark and Sheryl Seib, the Indiana State Fair is more than just rides, livestock and fair food.

It’s where they first met and fell in love.

“I met him. He was six-foot-four, [had] beautiful blue eyes and it really was love at first sight!” says Sheryl Seib of Posey County talking about the first time she laid eyes on her husband Mark.  She was a high school student and 4-H member from Columbus in Bartholomew County when the two first locked eyes with each other at the Indiana State Fairgrounds in 1976.

“We were at Boys State and Girls State school for 4-H and there was an initiation dance in the Farm Bureau building between the two schools, and this group of boys was sitting in a chair and I said, ‘Which one of you lucky guys would like to dance with me,’ because that was my job as an honor girl,” according to Sheryl.

Mark has his own version of the story of how the two first met.

“We were all in a line [and former Director of the Indiana State Department of Agriculture] Ted McKinney was right beside me. [It was the] first time I met Ted McKinney, and he pushed me out to dance with Cheryl for the first time and ever since then that’s why we’ve been always together,” says Mark.

It was one year later at the Indiana State Fair where Mark dropped down on one knee in a peculiar location to ask for Sheryl’s hand in marriage. 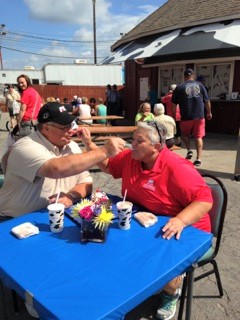 Mark and Sheryl Seib celebrating their anniversary over milkshakes and grilled cheese sandwiches at the Dairy Bar during the Indiana State Fair, which is where they had their first date (with her mother present) in 1976. Photo courtesy of Mark and Sheryl Seib.

“He proposed to me in the hog building at the State Fair one year after I met him, and so the connection is there,” says Sheryl. “Our first date with my mother was at the Dairy Bar and we had milk shakes and grilled cheese sandwiches, and every year we go back and get a grilled cheese sandwich and a milkshake to celebrate!”

Why did Mark propose to Sheryl in the Indiana State Fair’s Hog Barn?

“So, the whole family was together at one location at one time,” according to Mark. “It was at the State Fair where Sheryl and I met, and that made it the perfect decision to make the announcement because after we had been together for a year, I knew she was the one. There was no doubt in my mind. From that point forward, with us raising hogs, I thought if she’s going to stick with me, she’s going to stick with me being proposed in the hog barn as well.”

Mark and Sheryl got married in 1979 – and together have been recently honored by Prairie Farmer Magazine and the Purdue University College of Agriculture with the “Master Farmer Award.” 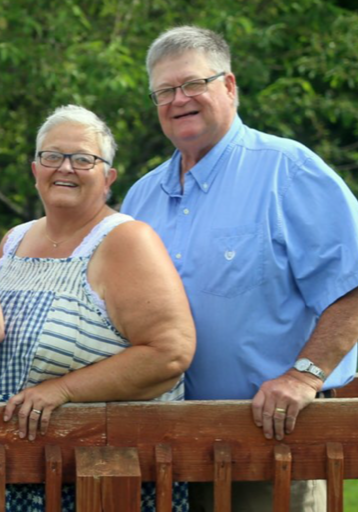 Sheryl says she was destined to be with Mark.

“Growing up in high school, my best friends were all farmers’ daughters, and I always said, ‘I’m going to marry a farmer,’ and they all told me that that was the craziest thing they’d ever heard,” says Sheryl. “By golly, I did get a farmer in Posey County – a hog farmer at that, and now a grain farmer – and I have no regrets.”

You can count on both Mark and Sheryl returning to the Indiana State Fair this year to celebrate their anniversary, as they have for many years, since they first met over milkshakes and grilled cheese sandwiches at the Dairy Bar.

“It has been quite a ride and I wouldn’t change a single thing!” says Sheryl as she beams with pride over her husband. “I still think he’s the most handsome man on earth and I still think the Indiana State Fair is a great place to be.”

Click BELOW to hear C.J. Miller’s news feature on Mark and Sheryl Seib from Posey County and how they first made their love connection at the Indiana State Fair.

Click BELOW to hear the FULL interview with Mark and Sheryl Seib as they talk further about their love for each other and how the Indiana State Fair serves as a special place and event for them both. 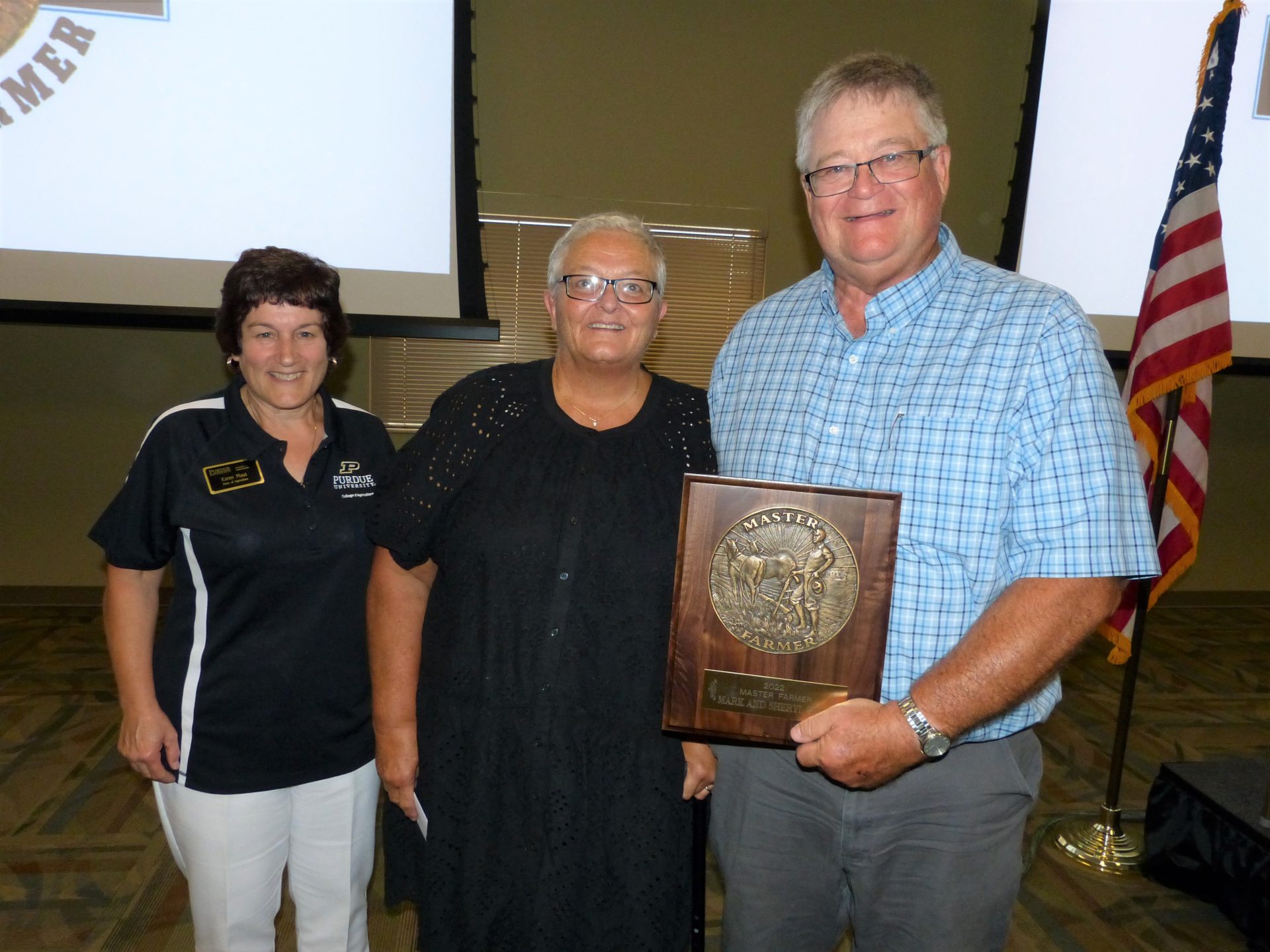